France returns to host the Volvo Ocean Race from Lorient, in Brittany on the northwest coast of France, in the summer of 2012. Lorient will be the penultimate stopover in the race, which starts from Alicante, Spain in the autumn of 2011. Like La Rochelle before it (1997-98 and 2001-02), Lorient will also host a stopover in 2014-15 edition of the race.

The announcement of Lorient follows that of start port Alicante, and Cape Town and Lisbon as host ports.  Lisbon in Portugal will play host to the start of the leg to Lorient, which is around 700 nm.

"We are extremely pleased to have a strong French presence in the race," said Volvo Ocean Race CEO, Knut Frostad.  "It has long been our goal to reignite the passion of this classic event among the French people and we are delighted to have reached an agreement with the city of Lorient to host the event for two consecutives races," he said.

France has fielded 21 entries in the race, taking part in every race from 1973-74 up until the sixth race in 1993-94 in which La Poste finished third. L'Esprit d'Equipe, skippered by Lionel Péan, was the overall winner in 1985-86 and 289 French sailors have taken part in the previous 10 races.

"In 10 years, Lorient has transformed its submarine base into EU-wide sailing cluster hosting a village dedicated to yachting enterprises.  It is where the maxi trimarans Banque Populaire V and Groupama 3 were built and it also has an offshore sailing centre with around 50 teams taking part, including France's most famous skippers," said Norbert Métairie, Mayor of Lorient and Cap l'Orient district's President. "Today we are particularly pleased to have shown that Lorient is a perfect site to host international events which are able to generate significant benefits like the Volvo Ocean Race does," he added.

The Cité de la Voile Eric Tabarly, a complex dedicated to modern sailing races and bearing the name of the French skipper who sailed in The Whitbread four times (1973-74 Pen Duick VI, 1981-82 Euromarché, 1985-86 Côte d'Or and 1993-94 on La Poste), will be situated right in the centre of the race village.

Groupama, skippered by Franck Cammas, who is currently taking on the Jules Verne Trophy - a prize for the fastest circumnavigation of the world by any type of yacht with no restrictions on the size of the crew - has Lorient as its home base and will be France's entry in the next two races.

The next European port will be announced shortly.

The Volvo Ocean Race traces its origins back to 1973 and is the world's premier offshore sailing race. The Volvo Open 70 racing boat is sailed by professional athletes, who race around the world with the prevailing winds.

Keywords:
Special Interests, Sponsorship
Descriptions and facts in this press material relate to Volvo Cars' international car range. Described features might be optional. Vehicle specifications may vary from one country to another and may be altered without prior notification.
To view the full copyright information click here
Media Contacts
Related Images
Mar 05, 2010 ID: 32089 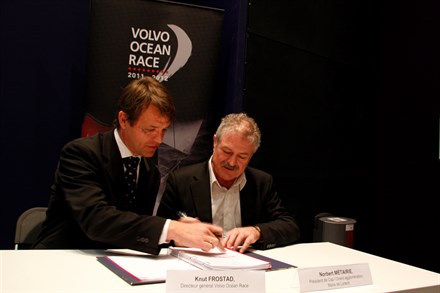