After a fierce bidding process, Lisbon has been chosen as the first of the European ports for the Volvo Ocean Race, starting from Alicante in the autumn of 2011. Lisbon, located in the west of Portugal, at the point where the river Tagus flows into the Atlantic Ocean, will be the finish of the transatlantic leg of the race during the summer of 2012.

It will be the first time that this historic Portuguese port has played a part in the world's premier ocean race.

Interest in hosting the Volvo Ocean Race in Europe was received from 34 cities, 15 of which went through to the final phase of the bidding process.  This clearly underlines the enormous interest the race generates and makes Europe by far the most competitive continent in the selection procedure.

"It is great to have such an iconic city included in our list of stopovers and Lisbon, especially, has wonderful sailing conditions, which will make for a very exciting in-port race," said Volvo Ocean Race CEO Knut Frostad.  "Lisbon is a delightful city with much to offer the Volvo Ocean Race and this will be a stopover to look forward to after the rigours of the transatlantic leg," he added.

"Portugal is a country of navigators that opened the world to new horizons and its capital, Lisbon, was the starting point for the fabulous saga of the Discoveries. A city with such grand nautical tradition had to be associated with the biggest transoceanic adventure of modern times and it is with utmost honour and pride that we are now a part of the Volvo Ocean Race's global itinerary," said António Costa, Mayor of the City of Lisbon.

The next European port will be announced on Wednesday 3 March.

The Volvo Ocean Race traces its origins back to 1973 and is the world's premier offshore sailing race.  The Volvo Open 70 racing boat is sailed by professional athletes, who race around the world with the prevailing winds.

High resolution images can be downloaded from http://images.volvooceanrace.org/

Full press information can be read and downloaded from http://press.volvooceanrace.org/

Keywords:
Life Style, Special Interests, Sponsorship
Descriptions and facts in this press material relate to Volvo Cars' international car range. Described features might be optional. Vehicle specifications may vary from one country to another and may be altered without prior notification.
Media Contacts
Related Images
Mar 02, 2010 ID: 32065 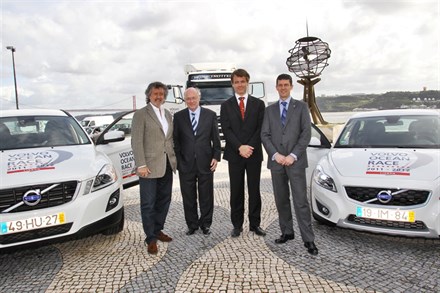