The all-new Volvo S60, launched at Geneva Motor Show 2 March, 2010  has been sculpted to move you - both physically and emotionally.
It has an extrovert attitude never before seen in Volvo showrooms. It is also without a doubt the most dynamic car model Volvo has ever presented - and its Pedestrian Detection with full auto brake is a groundbreaking safety feature. City Safety is standard in Volvo S60.

Coupe with four doors
The all-new S60 is sportier and more dynamic than any previous Volvo. But it is still an unmistakeable representative of Scandinavian design at its best.
Virtually all the lines were penned to carve out the "coupe with four doors" profile. The C-pillar stretches sensually all the way to the tail lamps - and the slim coupe-like roof line is accompanied by a new contour on the shoulders on either side of the lower body, creating a gentle yet powerful double wave from the headlamps at the front to the tail lamps at the rear.

Exclusive quality inside
Volvo's designers obtained their inspiration from the racing track as they pursued the uncompromising sportiness inside the all-new S60. The graphic character of the racing track is clearly apparent in the instrument panel and in the doors. Every detail looks like it's in motion. The instruments and centre stack are angled towards the driver to create a sensation of focus and control. The new dynamic three-spoke steering wheel and new sports seats with extra side supports are standard.
The interior is lavish in terms of its driver-oriented details, but it is still a five-seater car offering comfortable space for all its occupants.
Beige and black are the main colours of the upholstery range, which is spiced up with the new highlight shade Beechwood Brown. The décor inlays are available in Charcoal, Shimmer Graphite aluminium or Urbane Wood.

New infotainment system
The S60 has an all-new infotainment system where information from the audio unit, navigation system, mobile phone and other functions is presented on a five-inch or seven-inch colour screen in the upper part of the centre console. The screen is installed high to make it easy for the driver to keep his or her eyes on the road.
The driver has access to all infotainment functions via controls in the steering wheel.

Enhanced audio system
The audio experience in the all-new S60 has been enhanced compared with previous models.
The most advanced system, Premium Sound, has a class-D digital 5x130W amplifier with circuits from Sweden's Anaview, Dolby Digital in combination with Dolby Pro Logic II Surround, the award-winning MultEQ from Audyssey Laboratories and 12 loudspeakers.
In addition to the top-of-the line Premium Sound, the all-new S60 is available with a choice of three other audio systems.

The most dynamic Volvo ever
The all-new S60 is without a doubt the most dynamic car model Volvo has ever presented.
The sedan can be specified with a choice of two chassis. On the European market the newly developed dynamic chassis is standard, while most markets in North America and Asia will have the comfort chassis as standard with the sport variant available as an option.
The difference between the two chassis alternatives is to be found in the dampers and the front and rear sub frames. Here the comfort variant has a somewhat softer setting to give a smoother ride on poorer road surfaces.

Every detail refined
During the development process, the chassis team carved out a holistic solution featuring changes and refinements for virtually every single detail that influences a car's driving properties. This includes improved steering, stiffer springs and bushes as well as more damping than in any previous Volvo.

Driveline
The firm action to cut CO2-emissions has resulted in lowered fuel consumption throughout the engine programme.

More powerful T6 version
The T6 petrol engine has a displacement of 3.0 litres and has been improved still further, primarily thanks to lower internal friction. It now pumps out 304 hp and no less than 440 Nm of torque. At the same time, Volvo Cars' engine specialists have succeeded in cutting fuel consumption by about 10 percent to 9.9 l/100 km (EU Combined, preliminary figure).
The engine's power is delivered to the wheels via Volvo's second-generation six-speed automatic Geartronic transmission.

New direct-injected engines
The new four-cylinder 2.0T (GTDi as in Gasoline Turbocharged Direct Injection) engine has a displacement of two litres and produces a generous 203 hp, with 300 Nm of torque available from 1750 rpm. Acceleration from 0-100 km/h takes 7.7 seconds with the manual gearbox and 8.2 seconds with the automatic. The Volvo S60 2.0T with manual gearbox uses just 7.9 litres of fuel per 100 kilometres (EU Combined, preliminary figure).

The all-new S60 will also become available as a 2.0 GTDi variant (T5) producing 240 hp and torque of 320 Nm. Furthermore, there will be a 1.6-litre GTDi engine available in two versions: 180 hp (T4) and 150 hp (T3) with torque of 240 Nm.
All the GTDi engines will be available in combination with Volvo's automatic six-speed Power shift transmission or a six-speed manual gearbox.

Twin-turbo D5
The D5 high-performance engine with twin turbos produces 205 horsepower and 420 Nm of torque. Acceleration from 0-100 km/h takes 7.8 seconds (manual and automatic). Fuel consumption is 5.3 l/100 km (EU Combined, preliminary figure) with the manual gearbox, putting this engine in the running for best in class.

Automatic or manual gearbox
Both turbo diesels are available with six-speed automatic transmissions or a six-speed manual gearbox. The D5 can also be specified with all-wheel drive.

DRIVe diesel below 115 g/km
During the course of the first year of production, a DRIVe version of the all-new S60 will also be introduced, featuring a 1.6-litre diesel engine. Fuel consumption is 4.3 l/100 km (EU Combined, preliminary figure), corresponding to CO2 emissions below 115 g/km. The engine produces 115 hp and 270 Nm of torque, and will only be available with a six-speed manual gearbox.

A range of other functions

Collision Warning with Auto Brake warns and automatically brakes if the car risks hitting another vehicle from behind.

With City Safety, the car automatically brakes if the driver fails to react in time when the vehicle in front slows down or stops - or if he or she is driving too fast towards a stationary object. The system can lessen or even entirely avoid low-speed rear-end impacts at speeds up to 30 kilometres an hour.

Driver Alert Control is a unique technology to detect and alert tired and distracted drivers.
Blind Spot Information System helps detect vehicles in the offset rear blind spot on both sides of the car.
Lane Departure Warning alerts the driver if the car runs across the lane markers without the turn indicator being used.

New camera sees around corners
The S60 can naturally be equipped with parking sensors front and rear and a Park Assist camera at the rear. A camera in the front grille with a 180 field of vision is available as an option. This camera 'can see' around the corner and helps the driver negotiate blind exits and park with greater safety.

Keywords:
Old S60, 2011
Descriptions and facts in this press material relate to Volvo Cars' international car range. Described features might be optional. Vehicle specifications may vary from one country to another and may be altered without prior notification.
To view the full copyright information click here
Media Contacts
Related Images
Mar 02, 2010 ID: 31999 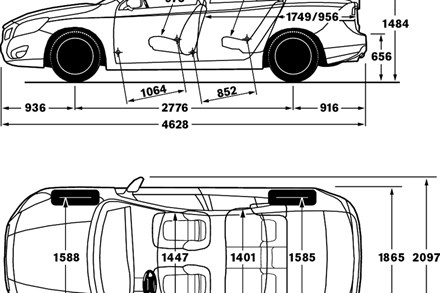