The Volvo for golfers everywhere

Fore! Here is Volvo Cars' first production car ever to run on electricity. What is more, it's pretty capable off-road.
The C70-inspired Volvo Golf Cart is recharged overnight and can be driven sixty kilometres on a single charge.

On June 1, 2009 Volvo Cars announced that the company will launch a plug-in hybrid car in 2012 as part of a joint project with Swedish electricity supplier Vattenfall. Already, however, the plug-in hybrid Volvo has been beaten to the market by a smaller version bearing the Volvo badge.

The Volvo Golf Cart admittedly does not embrace the same high-tech solutions as the forthcoming plug-in hybrid - and it has a totally different application area. It can carry players from one hole to another on the golf course.

The golf cart was developed by Swedish company Pro Green Nordic. It is the brainchild of Ulf Renner who first contacted Volvo Cars back in 2006. Since then, the company has travelled a long way to meet the demands from the design and marketing departments at Volvo Cars.

Lower weight with one seat

Most golf carts are two-seaters. Not the Volvo Golf Cart, which has just one seat. It is thus much lighter than its competitors are.

It is an exact scaled-down version of the C70. The colour is Electric Silver. An accompanying tow-hook makes it possible to tow a small trailer.

In addition to golf courses, the cart can be used in recreation facilities and for light transport duties at shows and trade fairs, for instance.

The aim is to unveil the cart to the golfing public during the European leg of the Volvo World Match Play Championship which will be held at the Finca Cortesin course in Casares, Spain, on October 29 to November 1.

Keywords:
C70, Life Style, Technology, Special Interests, Design, 1997
Descriptions and facts in this press material relate to Volvo Cars' international car range. Described features might be optional. Vehicle specifications may vary from one country to another and may be altered without prior notification.
Media Contacts
Related Images
Sep 16, 2009 ID: 30635 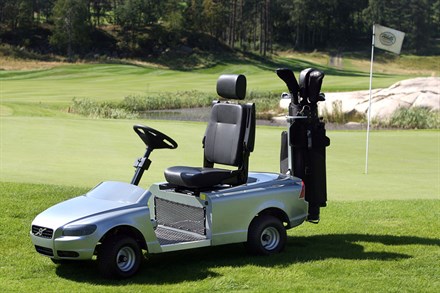 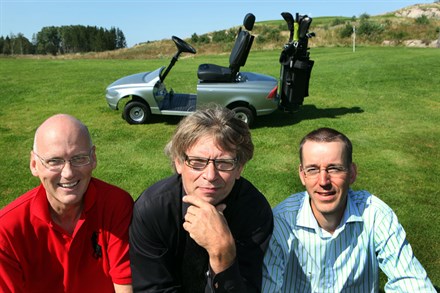