Volvo and Polestar promised and delivered 100%  - pole position, wins in both race heats and overall team victory for the weekend.

The seventh round of STCC took place this weekend in Valer, Norway. Being a favorite track, the Volvo team Polestar promised victory before hand. In front of a record crowd and over 270 Volvo Technician Day guests on site, the team kept its promise and delivered the show of the season.

Robert Dahlgren took his sixth pole position for the season and has together with his team mate Tommy Rustad taken 100% of all poles this STCC season. Even though Dahlgren dominated in qualifying, this weekend was going to be all about Rustad. In front of his home crowd and a grand stand dressed in green with Volvo coworkers, Rustad won heat one from seventh on the grid after an amazing drive and battle with Thed Björk.

Despite this explosion of energy in heat one, Rustad would prove he had even more in store for heat two. In this heat, Rustad started eight on the grid after reversed start order and was wedged in between BMW drivers Richard Göransson, 2:nd in the championship, and Thed Björk, 1:st in the championship. Despite his grid position and a race that was cut short by five laps by the safety car, Rustad came to dominate completely and managed to overtake everyone and claim a second win for the weekend.

"What an amazing day. The team was spot on the car was perfect. This is by far my best weekend in STCC so far. At the same time I closed the gap to championship leader Thed Björk, There is almost no corner left in STCC now where I haven't passed him" joked a happy Rustad.

Dahlgren's first heat was intense but short. After a messy start and a restart, Göransson in BMW managed to pass and go up in the lead. The very next lap, Dahlgren was up side by side with Göransson in the first corner. Side by side, with Dahlgren on the inside lane, no one would give in and it ended with a collision. Göransson fell back to last and Dahlgren punctured a tyre and retired.

To his surprise, Dahlgren was punished for his incident with Göransson, and got pushed back to last position on the starting grid for heat two. Outraged, Dahlgren gave 100%, passing competitors all the way through the finish line to claim a fourth spot and a total of five points. Together with Rustads 20 points, meant the Volvo drivers also bagged the team victory for the weekend. Most points scored over the weekend and 100,000 kronor in prize money.

"A satisfying second race allthough a disappointing weekend. But the car is fantastic now and I must say I am very proud over the team and especially over Tommy's outstanding performance in front of so many colleagues from Volvo Norway" said Robert Dahlgren.

Two rounds is all what is left of this years' STCC season. With the two wins, Volvo and Polestar is now in the fight for both the driver and team championships.

"This weekend did not only give a striking example over our current form but it also summarized perfectly what motorsport is all about for Volvo. To be able to feel joy and pride, both as engineer working with the racing car; as an employee, and as a Volvo owner. That's motorsport to us" said Derek Crabb, Motorsport Director at Volvo Cars.

Top 5 in the Team Championship throughout seven of nine race weekends:

Keywords:
Special Interests, Sponsorship
Descriptions and facts in this press material relate to Volvo Cars' international car range. Described features might be optional. Vehicle specifications may vary from one country to another and may be altered without prior notification.
Related Images
Aug 30, 2009 ID: 20590 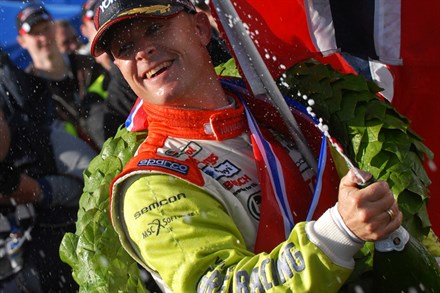