The sixth round of STCC took place at Karlskoga this weekend. Tommy Rustad, trailing Thed Björk and overall championship lead with two points, arrived with 55 kilos of penalty weight in his car. Dahlgren on the other hand had the lightest car on the grid and an updated engine. Dahlgren would also prove unstoppable this weekend - at least not through fair play.

Dahlgren tog pole as usual and his fifth out of six possible so far for the season. Rustad qualified sixth on the grid  just ahead of Björk. Heat one would still end up as a bad memory for both Volvo drivers. Dahlgren was pushed of the track by Jan Flash Nilsson in BMW in the first corner and ended up last on the grid. From that point and on, it was just a case of maximum attack for Dahlgren, and it would eventually mean a sixth place finish. Rustad's battle with extra weight was shortly overshadowed by an electrical malfunction. A wire-burn took out the electrical system in his car forcing Rustad to retire. His car could not be repaired in time for the second heat.

Dahlgren's second heat did not surprise anyone. With strict orders to stay clear of trouble in the first corner, Dahlgren exited the same as fourth from a third starting position. Five laps later, he was up in the lead and bagged shortly after his third win for the season and the top spot as the driver with most wins so far in this years STCC.

Despite claiming a victory this weekend, Volvo's team Polestar filed a protest against the attack on Dahlgren in heat one. The protest was rejected but this ruling will now be appealed. Team Manager Christian Dahl explains:

"It is neither Volvo's och Polestar's style to complain and file protests. But this offence was too obvious and too severe. STCC and the Swedish Motorsport Federation must be able to use its tools and rules to identify and act on things so obviously beyond the rules. We have decided we will take this case as far as we can".

The next STCC race weekend will be decided on Tommy Rustad's home track - Våler track in Norway on August 29. Both Dahlgren and Rustad like this track and promise a great show for all Volvo fans.

Keywords:
Special Interests, Sponsorship
Descriptions and facts in this press material relate to Volvo Cars' international car range. Described features might be optional. Vehicle specifications may vary from one country to another and may be altered without prior notification.
Related Images
Aug 16, 2009 ID: 20548 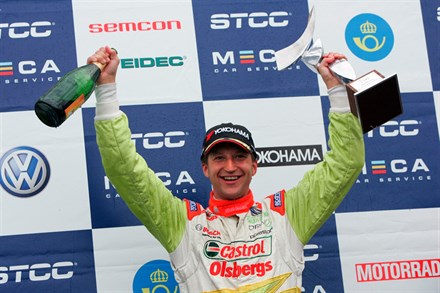