Magnificent Tommy Rustad won heat one from pole position and took a second place in heat two following the drive of the year from a reverse grid eight starting spot.

The fifth round of STCC took place at Falkenberg this weekend. The track, which is Volvos and Polestars favourite track, again became the scene for a fantastic show by the Volvo team Polestar and driver Tommy Rustad.

Rustad took pole position ahead of his team mate Dahlgren and could then claim a victory in heat one with ease. However, his performance in heat one would still end up in the shadow of his magnificent second heat.

From eight spot on the grid, Rustad gave one hundred percent right away and entering the first corner, which is a copy of the start chicane at Monza, he passed four cars on a daring outside line. Halfway through the heat, Rustad initiated a tight overtaking in the same corner on the third place holder in the race, Roger Eriksson in Seat. Eriksson, who had been very defensive for several laps, pushes Rustad off to the grass but still ends up beaten. The incident plays in to the hands of championship leader Thed Björk in BMW who takes advantage speed rubbing battle and passes both. At this point more than one visitor guessed a fourth finish for Rustad in the second heat. The Volvo driver had put a lot of stress on his tyres and was now behind Thed Björk in a rear wheel drive BMW. But this was to be Volvos and Rustads weekend with following laps a real treat for all Volvo fans. Rustad passed Björk on an outside line and the same hairy chicane and passed also Thomas Engström in Honda with ease to cross the finish line as second in the race after Richard Göransson in BMW.

"What a wonderful day. My car is fantastic. I know how hard Volvo and Polestar have worked with the car and I can only agree with Motorsport Director Derek Crabb - yes we can. They better watch out in WTCC at Brands Hatch" said a very happy Rustad.

Dahlgren, who dominated completely at Ring Knutstorp the weekend before with a win and a third place, was object of severe bad luck at Falkenberg. He was forced to retire in heat one and his car could not be prepared for heat two.

All exiting moments from the STCC race at Falkenberg will be shown on SVT2 on July 13 at 22:30.

Brands Hatch and the World Championship next weekend

STCC will now make a short pause but the Volvo team will race again next weekend and then in the British round of the World Touring Car Championship at Brands Hatch on July 18-19. The race will be broadcasted on Eurosport on Sunday at 12:45 Swedish time.

Keywords:
Special Interests, Sponsorship
Descriptions and facts in this press material relate to Volvo Cars' international car range. Described features might be optional. Vehicle specifications may vary from one country to another and may be altered without prior notification.
Related Images
Jul 12, 2009 ID: 20067 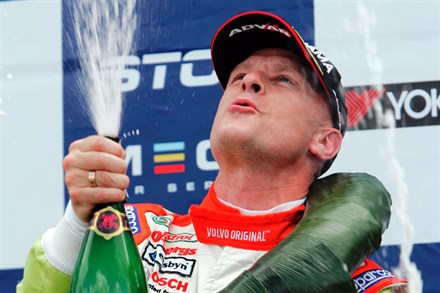 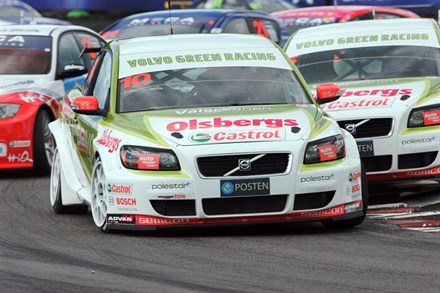