It was an historic moment tonight in St Petersburg, Russia, when as the White Night turned to dawn the Volvo Ocean Race fleet, led by Telefónica Black in a thrilling climax,  crossed the tenth and final finish line of this nine-month, 37,000 nm race around the world.

Spanish skipper, Fernando Echávarri said, "It's a prize for all the crew and all the shore crew. We have been trying to do it in all the legs but couldn't; this was our last chance. We had a nice battle with PUMA in the last 100 miles. We are really happy.

"It has been really difficult. We prepared the boat for light conditions and the first 150 miles we had more wind than expected so we suffered a lot. Then it got lighter and we got faster. We have been fighting with PUMA, Telefónica Blue and Ericsson 3 for the last 250 miles. It has been really close. It has been like a match race. I don't know how many tacks we have done! It is a great way to finish the Volvo Ocean Race. I am really proud of everyone in the group. They have done an excellent job."

Victory for Telefónica Black was hard-fought and a match race developed with PUMA, who had led the fleet for the majority of this 400-mile sprint from Stockholm.  At just after midnight GMT and while on the additional triangle added to lengthen the course, Telefónica Black gained a small advantage, which translated into a two and a half boat length win, denying PUMA a second leg win in a row.  However, with a total of 105.5 points, PUMA takes second place overall.

PUMA skipper Kenny Read said: "Congratulations to all those guys, they have worked very hard for their first leg win. We will take our second and our second overall. You know what? We just sailed around the world. I guess I said a thousand times that we know no other way but to make it hard for ourselves.  It's a shame, because we usually win these close battles and today we didn't.

"The big picture is we finished this race, everyone is safe and the boat has been spectacular. We flew the flag well for Volvo and I think we flew the flag well for PUMA. We have everything to be proud of. Relief is the right word. Right now, it is relief and, as always, we are a pretty tired group onboard. Let the celebrations begin because all the group deserves it."

Telefónica Blue (Bouwe Bekking/NED) filled the third spot both on leg 10 and overall, to close the team's account on 98 points.

Bekking said on finishing: "We're tired and hungry! It has been full on. Lots of tacking. It was a beautiful leg in that it was sunny. But we have been a bit unlucky. That's how it goes. But well done to the Telefónica Black boys, they deserved to win. They had a superb leg. Good for them. We were all very close. It is a very nice feeling to have finished and got all the boys home safely. We had a podium finish which is nice as well."

Fourth place finishers tonight and fourth overall with 78.5 points was Ericsson 3 and Swedish skipper, Magnus Olsson was exhausted. "I feel so tired I cannot say anything! Everybody is happy because they have sailed around the world, but they are also very tired. After a day or two we can say more intelligent things. You always want to do well in every leg, but this was special because it was the short one and the last one. We were up there so we are happy, but we couldn't keep up until the finish. They beat us fair and square."

Runaway overall leaders, with a final tally of 114.5 points and nine points clear of PUMA, Torben Grael and his 10 crew of Ericsson 4 finished this leg in fifth place.  In an interview with Guy Swindells, skipper Torben Grael, who raced every offshore leg with the same crew, was reflective in his comments as overall victory in the Volvo Ocean Race 2008-09 finally became a reality.

"I think it is a mixed feeling because we know this is the end of the story for the project. It's a funny feeling because some of these guys you have never met before and you become like brothers. Now we go our own ways and it's a strange feeling.

"On the other hand it has been a long race. It was a very long race around the world. We are completely drained and tired so I think everyone is looking forward to a nice rest. We have had a wonderful time. We enjoyed our training time in Lanzarote and the race as well. We have had our ups and downs, but it has been fun. After we won, it was a bit of a relaxing leg. It has been so intense and so consuming so I think it is normal that after you achieve your goals you relax. I am very glad for Telefónica Black and Fernando and his guys for winning this last leg."

Green Dragon kept her slender lead over Delta Lloyd to finish the leg in sixth place, and fifth overall with 67 points.

To conclude the Volvo Ocean Race 2008-09, Delta Lloyd, the only generation one Volvo Open 70 to compete in the race, finished shortly after Green Dragon to finish the race on a total of 41.5 points.

Skipper Roberto Bermúdez said: "We made a good job and everyone enjoyed their time. Everyone is happy and that is the most important thing. It started well but then there was some fighting with the Dragons. They did a fantastic job with the manoeuvres and I say congratulations to them for that. It has been fun."

Ian Walker, skipper of Green Dragon, should have the last word:

"It is a privilege to sail in this fantastic race and I am very proud to have had the chance.  I am proud of every member of our team, and I am proud of what we have achieved together.  We promised to give it everything and to never, ever give up and that is exactly what we have done.  We haven't won this race, but we have won many battles and achieved more than many dreamed possible.  It has been a very special year."

For elapsed times, please go to the Data Centre on the official Volvo Ocean Race website: www.volvooceanrace.org/rdc/   and navigate to the Data Tables.  You will find the elapsed times are under Position Data.

Full press information including a full breakdown of the final podium winner's results can be read and downloaded from: http://press.volvooceanrace.org

Keywords:
Events/Activities, Sponsorship
Descriptions and facts in this press material relate to Volvo Cars' international car range. Described features might be optional. Vehicle specifications may vary from one country to another and may be altered without prior notification.
Media Contacts
Related Images
Jun 29, 2009 ID: 19925 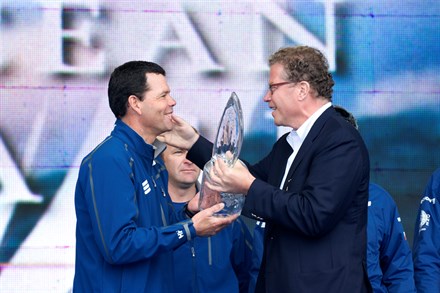 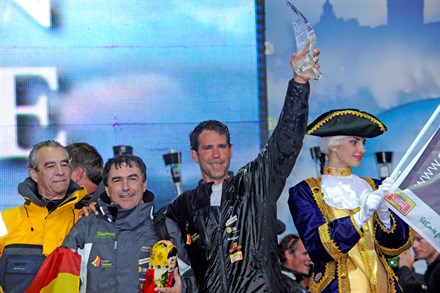