The fourth race of the season became a big pay-back for Volvo driver Robert Dahlgren - pole position, a win in heat one, fastest lap, and a third place finish in the second heat.

Volvo driver Dahlgren came to Ring Knutstorp extremely motivated after a yellow flag ruined the day at Gothenburg City Race. Although the track and the weather suggested a tough day for front wheel drive cars, with the asphalt at a scorching 50 degrees, no one could stop Dahlgren. Even hotter than the summer heat, Dahlgren claimed his fourth consecutive pole position for the year.

Dahlgren proved equally outstanding in heat one. After a perfect start, Dahlgren took command and kept it over the finishing line with a long tail of BMW:s behind him with Robin Rudholm, Thed Björk and Richard Göransson.

Dahlgren started the second race as eight on the grid and with instruction to stay out of trouble, especially in the start. The strategy paid off. Thed Björk and Richard Göransson, both in BMW, eliminated each other after the second corner - Thed ruined his weekend and car in the wall and Göransson dropped several positions. Dahlgren could thereafter follow strategy, pass three cars, and tick off a third place and 16 points for the weekend.

Rustad came to Knutstorp as second in the championship and with a fresh win from Gothenburg City Race. This meant 55 kilos of success-weight in the car. Despite this, he qualified third only three tenths of a second behind Dahlgren.

The rest of the weekend would however prove a tough journey for Rustad after several hard hits from behind from Richard Göransson in BMW, best described as a severely overheated on the day. In heat one, Rustad got hit on the side of the rear bumper and had to cope a 90-degree slide to escape the wall. Same driver had Rustad utilize all of his skills from previous championships titles in rally cross to save both himself and the car in the second heat. Although Rustad lost several positions in both heats on Grandsons' bumper-flirting, Rustad could still check out with two sixth place finishes, a total score of 6 points, and retain his second place in the championship.

When the dust finally settled, team manager Christian Dahl could sum up a very good weekend for Volvo:

"With the character of this track, Ring Knutstorp is like an away game for us. So when Dahlgren starts the weekend with a total of 14 points and can leave with 30 points, and Rustad can keep his second spot in the championship although carrying an extra 55 kilos in the car, we can only be very satisfied, pack up and get out of here smiling".

Next on the calendar is Falkenberg on Saturday July 11. This is STCC:s fastest track and the favorite track of the Volvo Team.

Keywords:
Special Interests, Sponsorship
Descriptions and facts in this press material relate to Volvo Cars' international car range. Described features might be optional. Vehicle specifications may vary from one country to another and may be altered without prior notification.
Related Images
Jun 28, 2009 ID: 19914 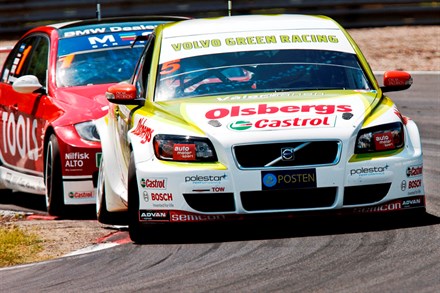