A third place finish in leg nine has been enough for Ericsson 4 to provisionally win the Volvo Ocean Race 2008-09.  The team now has a 13-point lead over PUMA, with just 12 points available in the rest of the race.

"We made a few errors on the leg, but we got what we wanted so we're pretty happy," said Ericsson 4 skipper Torben Grael.  "We were very close in Marstrand, but now it's done. It's finished. We can really enjoy it."

It was a good night for PUMA as well.  After a fearsome catfight with the crew of Stockholm-based Ericsson 3, whose crew wanted a win here in front of their home crowd more than anything, PUMA stole victory on the finish line tonight in Sandhamn (an island in the Stockholm archipelago just east of the capital city), and claimed full points for Volvo Ocean Race leg nine.

Today's win was PUMA's first leg victory in this 10-leg race, although they have had a good showing during the in-port racing.  Their score of 95 points so far strengthens their second place overall at this stage of the event.

"It feels fantastic and it's wonderful to be here in Stockholm. We feel a little sad to spoil Ericsson 3's homecoming, but it's a great win, and a hard-earned win," said American skipper Kenny Read.

"Man do we know how to make it hard. I don't think it has to be this hard, but somehow that's the only way we seem to have success.  We let them [Ericsson 3] go, on a little squall by lighthouse, and they went from half a mile behind, to overtake us.  We had to battle back, but none of these guys quit. They sailed a great race and it was quite a drag race.

"When we let them get ahead of us at the lighthouse, I think most teams would have quit right there, but adversity seems to be our friend and we got a little break when they got their jib hung up on the radar dome. It's a great relief to get our first leg win out of the way," Read said.

Fighting PUMA for second place overall is Telefónica Blue/Bouwe Bekking, who had the terrible misfortune of being grounded on a rock outside Marstrand shortly after the start. The crew expects to complete this leg and be in Stockholm in time to contest the in-port race on Sunday and thereby pile the pressure back on PUMA.

The largely Nordic crew of Ericsson 3, skippered by the hugely popular, Magnus Olsson, and winners of leg five, the longest leg of the race, had to settle for second place tonight, bringing their overall score to 71.5 points.

"It was very close. That was enough tacks for a lifetime. We wanted so badly to win and now Ken Read has destroyed my party. How mad do you think I am? From now on, I'm really going to pick on him," joked skipper Swedish Magnus Olsson, when he stepped ashore.

The final podium spot went to Ericsson 4, which ensures her overall victory in the Volvo Ocean Race 2008-09.

Although there is still one leg left to complete before the team crosses the finish for the final time in St Petersburg on 27 June, it is now not possible for them to be beaten.

Skipper Torben Grael said, "We are finishing Ericsson 4's circumnavigation. The boat was built here and left here nearly a year ago, so she's back after sailing around the world and winning the race. It couldn't be any better.

"We have a wonderful crew. A lot of experience. They have been fantastic on the whole leg, the whole race around the world. It's a pleasure to sail with them and get back to Stockholm in this position," he said.  Read Ericsson 4's full race statistics here: http://press.volvooceanrace.org/?p=3030#more-3030

For elapsed times, please go to the Data Centre on the official Volvo Ocean Race website:www.volvooceanrace.org/rdc/  and navigate to the Data Tables.  You will find the elapsed times are under Position Data.

Keywords:
Special Interests, Sponsorship
Descriptions and facts in this press material relate to Volvo Cars' international car range. Described features might be optional. Vehicle specifications may vary from one country to another and may be altered without prior notification.
Media Contacts
Related Images
Jun 16, 2009 ID: 19831 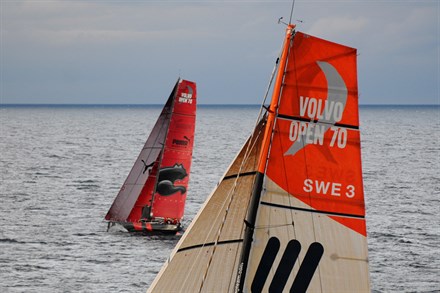