Volvo won in tough STCC round on home turf

Joy and tears for the Volvo team during Gothenburg City Race after pole position, new lap record, one victory and one penalty.

Volvos team Polestar did not hold back on its home turf during STCC:s third race weekend - Gothenburg City Race. Volvos drivers Robert Dahlgren and Tommy Rustad took command straight of the blocks and were fastest and second fastest respectively in both free practice and qualifying. Dahlgren's pole position lap was also a new lap record.

However, Dahlgren's pole position was transformed to an eleventh spot on the grid, since the team was forced to change his engine before the race weekend. Instead, Rustad started from pole in heat one and he never had to look back. After a perfect start, Rustad simply sailed away and kept the number one spot to win the heat.

"Absolutely fantastic! My car was great - extremely good grip, fast on the straights and very easy on the tires. I could have won one hundred heats today from pole with this Volvo" tells a very happy Rustad.

Dahlgren's strategy in heat one was to advance to a minimum eight finish to take advantage of the reversed grid for the top eight in the second heat. A confident Dahlgren went on to display the weekends most spectacular driving where he pushed his Volvo C30 between competitors and concrete walls at over 200 kilometers per hour with just millimeters to spare. Halfway through, Dahlgren passed Göransson in BMW to a sixth position. However to Dahlgren's big surprise, and to most of the audience, it proved that the passing occurred during a yellow flag. Dahlgren was immediately penalized with a drive-through through the pit which pushed him back to the last spot. Despite very quick laps towards the end of heat one, Dahlgren had to settle for seventeenth starting position in heat two.

I am extremely disappointed. We were well within our strategy and had margins to spare. Our plan was to take pole, Rustad to win heat one and I then I would go for a win in heat two starting from the first or the second row. Instead I made my fist passing under yellow flag in my career. I can't' explain this; I simply did not see the flag. Even more frustrating, there was not even an obstacle on that portion of the track" says a sad Dahlgren.

The second heat of the weekend would prove to be a very tough story. Starting from eight and seventeenth spot respectively, Rustad and Dahlgren set off the chase for points. They would claim points in the end, but only after hard fighting and significant damages to their cars. Rustad was hit hard from behind by Mattias Andersson in Alfa Romeo and Dahlgren's wheel to wheel fight with Jan Flash Nilsson in BMW ended in the wall for Nilsson after he stressed himself to make a big mistake. When the dust finally settled, Dahlgren had passed nine cars to an eight finish and one point. Rustad delivered a sixth position, three points, and a car that needs both straightening and a completely new paint job. The second heat was won by Honda driver Tomas Engström.

With the win in the first heat, Rustad and Volvos team Polestar climbed to a second place in both the drivers and team championships. Next race up is Ring Knutstorp on June 27 - a track that demands both courage and excellent driving technique. One that can't wait till then is Dahlgren:

"I will claim my fourth consecutive pole position, win the first heat and drive to a minimum podium finish in the second heat. And regardless if they wave flags in all the colors of the rainbow".

Keywords:
Special Interests, Sponsorship
Descriptions and facts in this press material relate to Volvo Cars' international car range. Described features might be optional. Vehicle specifications may vary from one country to another and may be altered without prior notification.
Related Images
Jun 07, 2009 ID: 19810 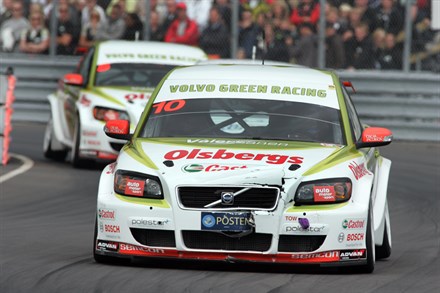 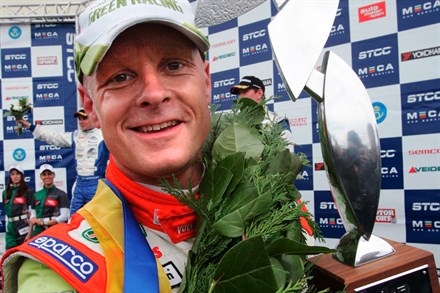