Points for Volvo and Polestar despite trouble

Points for Volvo and Polestar despite trouble

Volvo sticks to its green motorsport strategy despite technical challenges

Volvos team Polestar Racing came to the second STCC race round at Karlskoga Motor Stadium with high confidence after the double victory in the season opener at Mantorp Park.

For long it looked like the success would be repeated. Dahlgren claimed another pole position but due to an engine change after Mantorp Park, was moved back ten spots and started the first heat as eleventh on the grid. Tommy Rustad started from eight.

Both Dahlgren and Rustad impressed in the first heat and advanced several positions. Rustad finished fifth and Dahlgren sixth, opening up for a Volvo win in the second heat where the start position are reversed for the top eight.

Dahlgren started the second heat as third on the grid with Rustad one spot behind as fourth. Dahlgren would however be forced to retire with engine problems. Rustad finished eight and in the points after tough heat where he was hit from behind and lost several positions.

"Of course a big disappointment, the team and drivers did a very good job and fought well. The car was fantastic in qualifying and in heat one, then trouble in heat two. It feels a bit tough right now" says Team Manager Christian Dahl.

So far in to the season, Volvo has claimed two pole positions, one double victory and has encountered two engine problems. Rustad and Dahlgren are 6 and 11 points behind the championship leader respectively and there is still 140 points left to fight for. Derek Crabb, Director of Motorsport at Volvo Car Corporation, remains calm after the weekend and does not see any reason to change strategy.

"We have chosen to develop engines that run on E85 under technical regulations originally designed for petrol engines. We will not only continue with this, but we will also develop the strongest engine altogether under the FIA Super 2000 Regulations. What we see right now is simply a part of this development. With a fantastic team like Polestar and a Volvo organization that never shy's away from a challenge, we will succeed with this".

The next STCC round is Gothenburg City Race on June 6.

Keywords:
Special Interests, Sponsorship
Descriptions and facts in this press material relate to Volvo Cars' international car range. Described features might be optional. Vehicle specifications may vary from one country to another and may be altered without prior notification.
To view the full copyright information click here
Related Images
May 24, 2009 ID: 19556 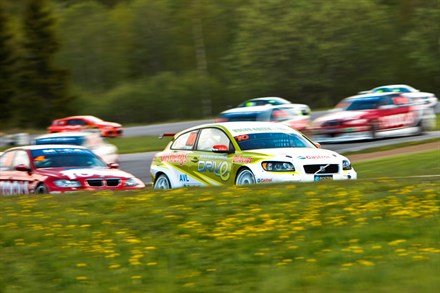