At 12,300 nm it is the longest leg in the 36-year history of the event and the first time that 60-year old Olsson, the oldest competitor in this year's race,  has taken part as skipper, having competed five times previously as a crew member.  His young navigator, Norway's Aksel Magdahl (30), is half the age of Olsson and is competing in this competition for the first time.

Olsson and his crew stepped ashore in the Marina da Gloria to a euphoric and emotional welcome after spending 40 days 05 hours 37 minutes and 57 seconds at sea and the huge smile on this popular skipper's face spoke volumes.

Buoyed by the result, Olsson said: "It's unbelievable. We actually deserve it.  We had a fantastic strategy when we needed it. Aksel did a really good job on that. We were so tired but we had a great fighting spirit to the end.  We sailed really well, and our performance was 100 per cent all the time.  We were on the borderline of destroying the boat, but we managed to find a balance and we managed to keep the boat in one piece."

Aksel Magdahl said, "It was a tough leg and I thought we would struggle more, but to then get to the second scoring gate first was amazing and to be here first is a bonus."

This win is all the more poignant for the fact that the team had already been at sea for three days longer than the rest of the fleet when they arrived in the Marina da Gloria today having had no stopover in Qingdao to rest and unwind.

Olsson and his crew had just over an hour to load 40 days' worth of food and diesel in Qingdao after finally completing leg four, and set sail again on the most demanding and potentially dangerous leg of the course, chasing the rest of the fleet that had already left seven hours previously.

Ericsson 3 had suffered serious structural damage during the gale-ridden leg four from Singapore to China.  The team had been forced to suspend racing on 27 January when they were in serious danger of sinking, in order to limp into Taiwan where they made substantial repairs.  They resumed racing on 11 February.

After starting leg five, Ericsson 3 was quickly back in contention, moving up to third place on day three, a position they made their own until, on day 19, 4 March, Olsson and his brave young navigator made their winning move.

They ignored historic navigational strategy that declared ‘south was best' and immediately after crossing the first scoring gate at latitude 36 degrees in second place, they tacked northeast away from the fleet.  Magdahl believed that the best course was to go north of the high pressure that sat between the fleet and Cape Horn and Olsson put all his faith on Magdahl's shoulders.

Race veteran Bouwe Bekking, skipper of Telefónica Blue, which had won the previous two legs said at the time, "If that route wins them the leg, they will write history, as up until now, in all the legs down south, the south has won."

Simon Fisher, helmsman on Telefónica Blue added, "We will have to see if their plan was genius or madness."

Magdahl explained his strategy around the high pressure at the time:  "Eighteen hours before the gate I realised this high did not seem to move so fast anymore.  I was also looking at a very interesting small, but powerful low pressure coming in from the northeast, and I thought a bit around whether it was possible to use this, rather than going slow south underneath the high pressure and even risking getting to close to it."

Two days, later, the northern decision paid off and Ericsson 3 took the lead and held on to it tightly for 19 days until today, when the team rewrote the history books.

The next boat to finish will be Torben Grael's Ericsson 4, later today.

Race reports are issued daily to the media at 1300 GMT by email while the fleet is at sea; however, positions are updated every three hours on www.volvooceanrace.org  where you will also find the latest news, feature stories, images and video.  Full press information can be read and downloaded from: http://press.volvooceanrace.org

If you are a first-time user, please take a moment to register.
For assistance, please Email: journalisthelp@thenewsmarket.com

Keywords:
Special Interests, Sponsorship
Descriptions and facts in this press material relate to Volvo Cars' international car range. Described features might be optional. Vehicle specifications may vary from one country to another and may be altered without prior notification.
Media Contacts
Related Images
Mar 26, 2009 ID: 19162 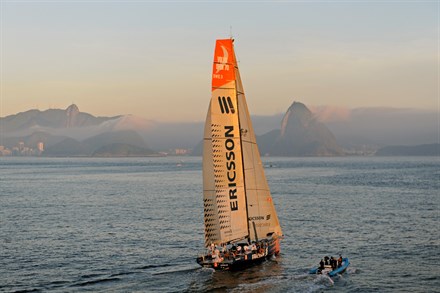 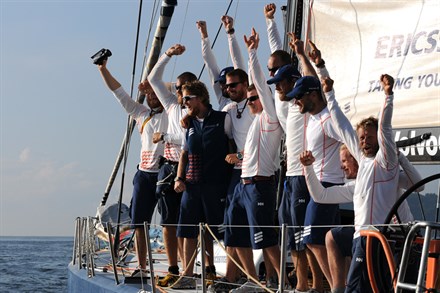