Even in the light and shifty breeze off Qingdao in China today, it was all on for the four Volvo Open 70s as they raced in the third of the in-port race series of the Volvo Ocean Race.  Today's racing was an exciting blend of lead changes and close match racing, with Ericsson 4 (Torben Grael/BRA) finally topping the leaderboard after two races.

After a two-day delay due to lack of wind and poor visibility, race one finally got underway after a short postponement.  It was Telefónica Blue (Iker Martinez/ESP/Bouwe Bekking/NED) and Green Dragon (Ian Walker/GBR), both flying jibs, who crossed the start line first with PUMA (Ken Read/USA) and Ericsson 4 (Torben Grael/BRA) setting code zero sails, crossing on port tack - a move that ultimately paid off for Torben Grael, who was the ultimate victor in this race.

At the first mid-course gate, Ericsson 4 had the advantage over Telefónica Blue who, on port tack, had to cross astern of Ericsson 4.  PUMA struggled with speed with the code zero and never really recovered from their second row start.

Ericsson 4 took the lead at the second gate, but a great recovery from Green Dragon changed everything as they challenged Ericsson 4 from their central position in the course, reducing the deficit to just one boat length in the shifting light breeze, a gain of around three minutes.

Meanwhile, Telefónica Blue, with Beijing Olympic silver medallist Iker Martinez in charge, split from the pack and took the left hand option after the gate, a move that initially brought them closer to the pack, but the windshifts did not work in their favour.

At the second windward mark, Green Dragon had gone from a very solid third place to the lead, but immediately after the mark rounding, Ericsson 4 rolled over the top of them and regained the lead.

The race split into two separate match races in the final run to the finish.  Ericsson 4 versus Green Dragon for first and second place and, a long way back, PUMA versus Telefónica Blue.

At the final mid-leg gate, Green Dragon held the lead in a slow, but thrilling climax to this in-port race which was in the hands of two of the world's best match racers, Torben Grael and Ian Walker.

As the wind dropped in the final approach to the mark, Green Dragon gybed, dropped her spinnaker and hoisted a code zero sail, but it was Ericsson 4 who crossed the finish first, 37 seconds ahead.

In third place, PUMA finished 11 seconds ahead of Telefónica Blue, a disappointing position for Bouwe Bekking who, after winning leg four, was hoping to close the gap to overall leader Ericsson 4.

It was all change for race two, where speed off the start line was key on a course that was much shorter than that of race one.

Ericsson 4 pushed PUMA over the line at the start, but it was a great start for Telefónica Blue, and a port tack start for Green Dragon was just what Ian Walker wanted.  Ericsson 4 came off the line with better pace than Telefónica Blue who had the stronger position.

At the first gate, Ericsson 4 and Telefónica Blue were in a dead heat, neither boat having the advantage. Green Dragon was a full 37 seconds behind, but in the remaining part of the leg Green Dragon made up lots of ground and crossed ahead of Ericsson 4.

However, at the windward mark, it was all change again as Telefónica Blue had the advantage and rounded first, followed by Green Dragon, with Ericsson 4 putting the pressure on, and PUMA trailing.

On the second beat, Telefónica Blue had nearly a half leg advantage, and after a fourth place in race one, it was critical that Telefónica Blue could finish race two within the time 90-minute time limit in order for her score to count.

On the final beat, Telefónica Blue held on to her lead to win the race comfortably, but, further back, the chasing pack struggled to lay the finish line.  Ericsson 4 eventually took second place, which was good enough for a win overall in today's series, PUMA moved up to third and it was disappointment for Green Dragon who finished fourth after such a good result in the first race.  A tiebreak between Green Dragon and PUMA favoured PUMA as the rules required the results from the second race to be used in this situation.

The next race in the in-port series will be held in Rio de Janeiro, Brazil, on 4 April after the finish of leg five (12,300 nautical miles), which starts next Saturday, 14 February.

Keywords:
Events/Activities, Special Interests, Sponsorship
Descriptions and facts in this press material relate to Volvo Cars' international car range. Described features might be optional. Vehicle specifications may vary from one country to another and may be altered without prior notification.
Media Contacts
Related Images
Feb 09, 2009 ID: 18794 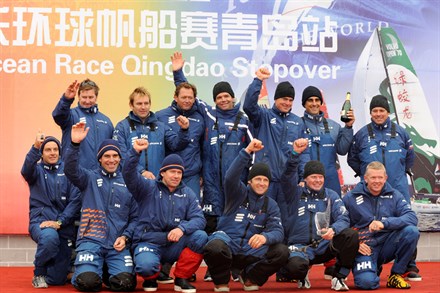 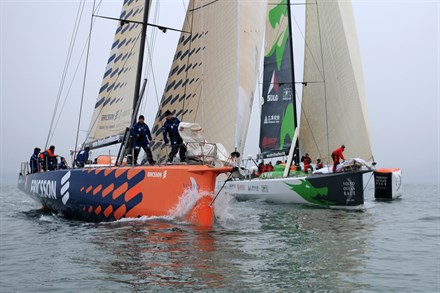