In a leg that has been full of drama, bravery and courage, Bouwe Bekking and his men racing Telefónica Blue has pulled off their second leg win a row to take first place on the podium in Qingdao, China, after sailing immaculately.

Once clear of the finish, an exhausted Bekking talked about the leg that has taken its toll on most of the boats in the fleet.

"I am so happy with the team, they showed great seamanship. We have Olympic medallists and offshore sailors onboard and they just got on with it and came together.

"We hit something, you can see it on the bow, but we don't know what it was. It has crushed a bit of the bow, but that is the only thing we have found.  We have checked all the bulkheads, they seem to be fine, and we have no delamination, so I am very happy with that.  We will be ready for the in-port race for sure.

"We just put keel in the middle and nursed the boat in the storm. I was downstairs at the time, so I kept shouting up to the crew to slow us down.  If I had been on deck, I might have pushed harder, but being downstairs was better in the end.

"It was the craziest sailing I've done, but we are here at last. I am like an old seaman and I think that you need to stay away from land in storms, so that is what we did. When we were by Taiwan there was 30 - 35 knots of wind, but it was the sea state that was the problem, but the boat did a glamour job."

Bekking had kept Telefónica Blue in the top three for the entire leg, but perhaps the turning point was navigator Simon Fisher/GBR made an offering of birthday Sangria to King Neptune on day three, in the hope that the King would keep watch as they headed out into the notorious Luzon Strait later in the leg.

The crew picked their way through the minefield of unmarked shoals and atolls in the lee of the Philippines, watching the depth sounder drop to just a few metres, but were still determined not to give an inch, knowing, as Simon Fisher had said, that to win this leg, taking the easy way round wasn't really an option.

As the rest of the fleet headed for shelter on day six, 23 January, Bekking was preparing for the worst.  "We are just enjoying the last day in paradise and then we go to hell," he said.  "The real race will start when the big breeze comes in and then, it will be very hard."

While the rest of the fleet hung back, Bekking pressed on, out into the 200-mile Luzon Strait and gales topping out at 55 knots.  Ericsson 3 (Magnus Olsson/SWE) and Ericsson 4 (Torben Grael/BRA) watched Telefónica Blue's progress from their chasing position in the shelter of Luzon Island, anxious to see how Bekking fared before following.

Bekking directed operations from the confines of his bunk, laid low with a damaged back.  He paid tribute to his crew at time, saying:  "They all worked as a great team in the last 36 hours.  The only thing I could do was be awake and give my input and advice, which was, above all, ‘boys, keep it in one piece'.

The team survived another, even worse storm off the northeastern tip of Taiwan, and also collided with a submerged object, damaging the crash bow section of the boat.

However, Telefónica Blue emerged from the aftermath of carnage relatively unscathed, other than breaking their wind instruments, and stole a commanding lead, which they held to the end.

Green Dragon (Ian Walker/GBR) is still racing, with 347 miles to go, and is anticipated to finish in fourth position on 31 January.

Teams that have suspended or retired from this leg will be assigned points by the race committee at a later date.

Race reports are issued daily to the media at 1300 GMT (1000 GMT Saturdays) by email; however, positions are updated every three hours on www.volvooceanrace.org  where you will also find the latest news, feature stories, images and video.  Full press information can be read and downloaded from: http://press.volvooceanrace.org

Keywords:
Special Interests, Sponsorship
Descriptions and facts in this press material relate to Volvo Cars' international car range. Described features might be optional. Vehicle specifications may vary from one country to another and may be altered without prior notification.
Media Contacts
Related Images
Jan 29, 2009 ID: 18729 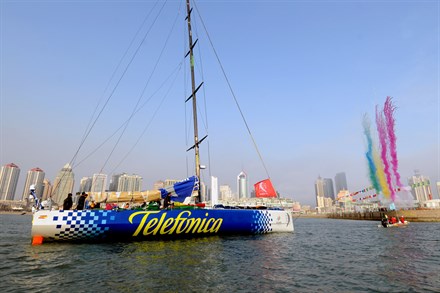 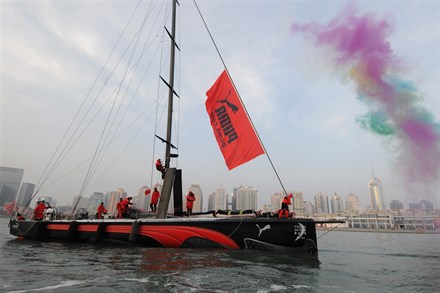