Volvo for Life and the Weavers

The Weaver family should be on a survival TV show: their son went off the road and and down a steep slope - and survived. His wife's car flipped over - but she was unhurt. A tree fell on the front of his own car - but it was still drivable.

"We would like to thank Volvo for helping to protect our lives," says Richard Weaver of Kentucky.

The Weavers of  New Castle, Kentucky, in the US are true Volvo fans. They have had eight Volvos between them since 1994.

And Richard Weaver is firmly convinced that his family would not be complete today if they had owned other brands of car. This is because several nasty incidents have befallen them in recent years. But - touch wood - all of them were miraculously able to climb out of their Volvos unscathed.

Son Jeremy was the first. In 1994 he was just 17 and doing local pizza deliveries. He had only just bought his first car, a Volvo 240.

On his normal pizza round one rainy evening, he was unlucky enough to come off the road. His car started to go down a ten-metre slope, but then some trees halfway down brought him to a halt.

"As he climbed out of his car, he grabbed hold of something. It was a memorial cross - someone else had died in an accident at the very same spot," says Richard Weaver.

It took two tow-trucks to winch his car back up again. Back on the road, he got back in and tried the ignition. The car started - and it had suffered so little damage that he was able to go on delivering pizzas in it.

More recently, Richard's daughter, who lives in Dallas, was back home in New Castle with her son. At the end of their stay, they were being driven to the airport by Nancy, Richard's wife, in another of the family Volvos, a S70.

Then suddenly the traffic on the freeway ahead ground to a halt. Nancy lost control of the car and it flipped over at around 65 mph.

"The car was a write-off. My daughter's head hit the window on the passenger side. But all three of them were able to get out and walk away from the car."

A few days prior to this, Kentucky was hit by a series of storms and a tree fell right onto the family's other Volvo, a 1985 740 GLE. Luckily, Richard was not in it at the time.

"That was a really bad week for us. But even though the tree fell onto the hood, the car would still start and it was still drivable. Although I have had to let it go as a result. It was the apple of my eye - it had done almost 500,000 miles," says Richard Weaver.

He and Nancy couldn't do without Volvos for long. First he flew to Dallas to borrow their daughter's 240. It took 14 hours to drive it back to Kentucky.

Then he went off to Atlanta in Georgia to buy a black 1998 Volvo V70R. Bringing that one home took him eight hours.

"I'm honoured to drive Volvos. Your company has helped to protect my family. I think you make the best cars in the world for the money. "Volvo for Life" is a slogan that really means what it says," says Richard Weaver.

Keywords:
Safety
Descriptions and facts in this press material relate to Volvo Cars' international car range. Described features might be optional. Vehicle specifications may vary from one country to another and may be altered without prior notification.
Media Contacts
Related Images
Aug 13, 2008 ID: 16683 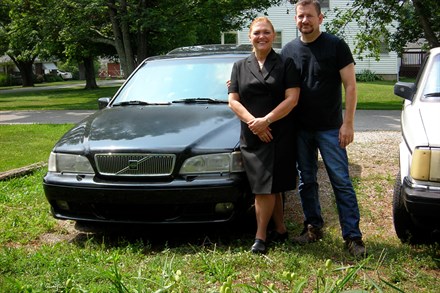 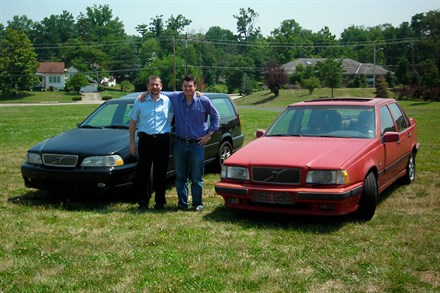