Success marked by safety - 50 years of Volvo in Germany

In 1958 Volvo Cars had two models, today there are ten series and 84 model variants

50 years of Volvo in Germany - a success story from the "economic miracle" until the 21st century. This year sees Germany holding the position of third largest market in the world for Volvo Car Corporation, following the USA and Sweden, Volvo Cars' home market. The fate of the Swedish, premium-brand automotive manufacturer, which celebrated its 80th birthday last year (2007), is controlled in Germany by Volvo Car Germany GmbH based in Rodenkirchen in Cologne. There are currently approximately 200 workers employed at the wholly-owned subsidiary of the Volvo Car Corporation. In Germany Volvo Cars has an extensive distribution and service network currently boasting 323 sales sites and 69 establishments dealing exclusively with servicing - 392 locations altogether.

Over the past half a century, the Swedish automotive manufacturer has established a reputation for safety, unique design and technical innovation. The most recent example of this is the new Volvo XC60. The all-wheel drive crossover model combines the versatillity of the Volvo XC range with the dynamics of a sport coupé. The release of the Volvo XC60 onto the German market in autumn 2008 means that Volvo's range of cars will be greater than ever before and will now encompass ten series and 84 model variants.

"Over the past 50 years, Volvo has earned itself a solid reputation. Besides its legendary reputation for safety, customers also value the excellent quality and unique, attractive design. This means that Volvo in Germany is now in an outstanding position with importers and is the only real alternative to the German premium car brands," says Thomas Viehweg, who, since autumn 2006, has been Managing Director of Volvo Car Germany GmbH and President of the Central European region, and adds:
"The range of cars leaves little to be desired and extends from the compact category Volvo C30 model, the medium-sized cars Volvo S40 and Volvo V50, the dynamic Volvo S60 saloon, the attractive Volvo C70 cabriolet, probably the safest estate car in the world, the Volvo V70, right up to the all-wheel, all-rounder Volvo XC70, the Volvo XC90 sports utility vehicle and the luxury-class Volvo S80 saloon.  With the release of the Volvo XC60 crossover model in autumn, Volvo in Germany will have brought the tenth series onto the market and, in addition, will possess the fastest growing segment with an excellent product at an extremely attractive price."

The history of Volvo in Germany
In 1958 Volvo founded its first subsidiary in Frankfurt am Main and in the November of the same year the trademark was registered with the German Patent Office. However, the conditions for starting up were pretty difficult. After the USA, Germany boasted the world's greatest car production; however the share of import vehicles was 9%. At the beginning of the 1960s the Swedish company was represented in all cities, except for Bonn, and 814 vehicles were sold in 1962. And in 1964, the Federal Motor Transport Authority (in German: Kraftfahrtbundesamt, KBA) recorded a four-figure number for the first time at 1,050 cars. In 1965 Volvo GmbH relocated its registered office to the recently built Import Centre in Dietzenbach. And at the end of the 1960s the 140 series models were in very high demand because of their box-like shapes and their high level of safety. The German slogan "Sicherheit aus Schwedenstahl" (literally: "Safety from Swedish Steel") made a significant contribution and the number of registered cars rose to 4,028 in 1969.

The 1970s
The breakthrough in Germany came in the 1970s. One of the highlights was the Volvo P1800 ES, which became the legendary "Glass Coffin of Snow White" (in German:  "Schneewittchensarg"). Today the Volvo P1800 ES is one of the most sought-after classic cars of all times. In 1971 more than 10,000 Volvo models (10,446) were registered in Germany. In1975 Volvo acquired the car division of the Dutch manufacturer DAF, as the Swedes did not have a "small" Volvo on the market at that time. In1976 the Volvo 240 and 260 were released in Germany and for the first time the Swedes broke the sound barriers with 20,000 new registered vehicles.  That year Volvo was the first manufacturer in the world to introduce the three-way catalytic converter and the oxygen sensor in the 240/260 series. In 1979 the number of registered cars increased to 24,997.

The 1980s
In 1982, Volvo presented an ecological innovation (which is still widely discussed today) in the form of the start/stop system, where the engine can be turned on and off at the touch of a button. The new technology was then used in the Volvo 244 and 245 models. However, the number of registered cars in Germany was deceasing and this sped up the launch of new models. In1986, the most luxurious model up to that point in time, the Volvo 780, was introduced, which was developed in conjunction with Bertone. That year also saw the first Volvo 480 ES, which was the first front-wheel drive made by Volvo. 1986 also saw the launch of the Volvo 760 as an estate car, molding the lasting image of Volvo as an estate car manufacturer. In 1989 there were 18,206 new cars.

The 1990s
In the 1990s Volvo presented numorous world innovations and innovative safety technologies.  This decade also said farewell to the "box design" and welcomed new stylistic elements oriented on the Scandanavian design. In1991 the Volvo 850 GLT was launched in Germany. It was successful all over the world and received over 50 international awards.  In 1994 the Volvo car division, with the exception of the training centre, relocated from Dietzenbach in Hesse to Brühl in North Rhine-Westphalia, to be geographically close to the potential merger company, Renault. When it was determed that the amalgamation was not going to materalise, the automobile town, Cologne, became the new Volvo Cars headquarters in Germany  and then later relocated to the Rodenkirchen district of Cologne.

With 22,505 cars in 1995, the number of registered cars had exceeded the 20,000 mark of the record year 1979.  In 1996 a completely new generation of cars was introduced with the Volvo S40 saloon and the Volvo V40 sport estate car. In 1997 a new sound barrier was broken with 36,675 cars. The market share went up by one percent. 1998 saw the new luxury Volvo S80 sedan, and the Volvo C70 was the first four-seater convertible of its kind for over 40 years. That year, with 42,267 cars sold, Volvo in Germany achieved its best sales figures in history.  1999 onwards was the start of a new era for Volvo Car Corporation, as the company was bought by Ford Motor Company and was integrated into the American company. At that point in time the new "Ford subsidiary" Volvo Cars sold 38,607 cars in Germany.

The 2000s
Volvo Cars has continued to build its range of models with much commitment. In 2000 the all-new Volvo V70 was introduced which was established as a timeless, elegant estate car. The sales figure rose to 41,563 cars. The sporty, dynamic Volvo S60 sedan was also released and won the "Golden Steering Wheel" award. In 2002 Volvo sold 42,132 cars; the market share rose to the optimum level of 1.3 percent. In 2003 the Swedes presented their first sports utility vehicle (SUV) - the Volvo XC90 - which from the outset was a great success and was the top-selling Volvo in the world. At the end of 2006 came the launch of the compact car - the Volvo C30. Before its launch, the four-seater, two-door car was described as the "nicest compact car in the world" and won a number of awards, one of them being the "Golden Steering Wheel" award.

In 2007 the third batch of Volvo V70s came onto the market with a multitude of technical improvements. Parallel to that, the re-make of the all-wheel drive car, the Volvo XC70, was introduced.  The Motor Transport Authority statistics showed that 33,485 cars were registered and that it had a market share of 1.1 percent.  The total number of Volvos in Germany on 1st January 2008 was around  420,000 cars.

The next milestone in history, set by the Swedes at the beginning of 2008, was the introduction of the new Volvo XC60. The crossover model embodies the new style of the Swedish premium car manufactuer and is the first car in the world which comes equipped with the City Safety System as standard.

Keywords:
Historical
Descriptions and facts in this press material relate to Volvo Cars' international car range. Described features might be optional. Vehicle specifications may vary from one country to another and may be altered without prior notification.
Media Contacts
Related Images
Jul 25, 2014 ID: 16156 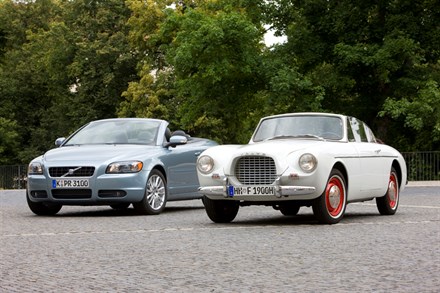 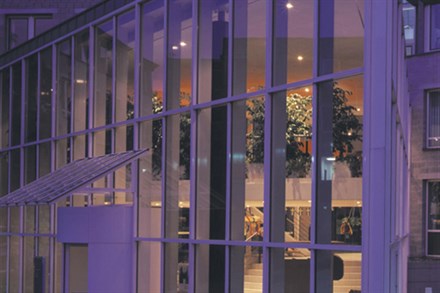