“We were the first car maker to develop and produce a diesel-based plug-in hybrid powertrain with the launch of the V60 D6 in 2012. Since then we have been working on further refining our innovative approach to electrification and hybrid powertrains, as can be seen in our brand new XC90 T8 Twin Engine which is just entering full-scale production. With the launch of the V60 D5 Twin Engine Special Edition we are broadening our Twin Engine product range,” said Dr. Thomas Müller, Vice President Electrical and Electronics Systems Engineering at Volvo Car Group.

The V60 D5 Twin Engine will deliver 120 kW via the combustion engine and about 50 kW from its 11.2 kWh Lithium-ion battery pack using the same proven configuration used in the V60 D6 Twin Engine. This translates to a maximum driveline power output of approximately 230 hp when the electric motor and diesel engine are working simultaneously.

“We decided to offer a special edition of the V60 D5 Twin Engine to celebrate the growing success and continued roll-out of our Twin Engine product range. We are one of few car makers that deliver a true no compromise driving experience – combining the benefits of pure electric drive, high performance and great fuel economy,” added Dr. Thomas Müller.

The Special Edition is delivered with Crystal White exterior paint, 19-inch wheels and glossy black exterior detailing. Inside, the car is equipped with a black headliner and piano black trim. The V60 D5 Special Edition will also feature the unique Blond sport seat upholstery with decorative white stitching as seen in our Volvo Ocean Race editions.

Just 500 examples of the special edition model will be built, while a regular V60 D5 Twin Engine will be more widely available later this spring.

In Pure mode, the car is powered solely by its electric motor as much as possible. The range is up to 50 kilometres.

Hybrid is the standard setting whenever the car is started. The diesel engine and electric motor cooperate to achieve CO2 emissions (NEDC, mixed driving cycle for certification) of 48 g/km (1.8 l/100km).

In Power mode, the technology is optimised to give the car the maximum possible power. The diesel engine and electric motor combine to deliver a total power output of 230 hp and maximum torque of over 600 Nm. The car accelerates from 0 to 100 km/h in 9 seconds.

Keywords:
Product News
Descriptions and facts in this press material relate to Volvo Cars' international car range. Described features might be optional. Vehicle specifications may vary from one country to another and may be altered without prior notification.
To view the full copyright information click here
Media Contacts
Related Images
Mar 02, 2015 ID: 159237 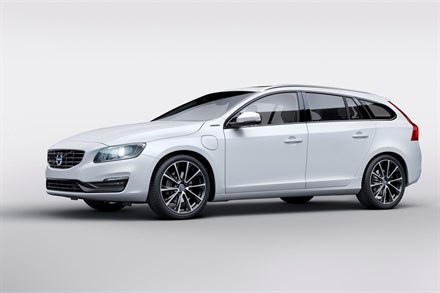