Following the signing of a groundbreaking joint management agreement between Volvo, golf's most experienced and enduring corporate brand and IMG, the leading sports management company in the world a new chapter for the World Match Play Championship is about to be written under Volvo and IMG's stewardship.

The newly-named Volvo World Match Play Championship will be transformed into a truly worldwide showcase thanks to a new host country, Spain, a new blue-chip venue, Finca Cortesín in Andalucía, a new ‘champion's league,' match play format and the most rigourous and transparent qualification criteria in the 44-year-history of an iconic event that is about to go genuinely global.

With a total prize fund of €3.25million (approx. US$5million / SEK30million) and the champion's cheque worth more than a million dollars, the Volvo World Match Play Championship, scheduled for the autumn of 2009 and for an initial three-year period will see 16 of the finest golfers in the world and drawn from every continent on earth going head-to-head in search of one of the most coveted crowns in global golf.

With match play considered by many to be the purest form of golf, the Volvo World Match Play Championship is certain to be the ‘duel-in-the-crown' of the circuit and will be a key component in the new European Tour‘Race to Dubai.'

As one chapter commences, another concludes with the industry-leading Volvo Masters taking the final curtain in what is sure to be emotive and dramatic fashion with a record €4.25million (approx. US$6.6million / SEK40million) prize fund on offer at Valderrama from 30th October - 2nd November 2008.

Arguably the biggest business name in European golf, Volvo, was today unveiled as the new exclusive title sponsor and joint Management partner of the World Match Play Championship ahead of its 45th anniversary in 2009 in an innovative initial three-year agreement with IMG, who created the iconic event in 1964.

Along with a new format and qualification criteria (see attached), the Volvo World Match Play Championship will also move to a new home, the 7,439-yard Par-72 Finca Cortesín Golf Club near Malaga in the Andalucia region of Spain and will see a stellar match play field going head-to-head for a million-dollar-plus champion's cheque.

Sanctioned by The European Tour and bringing together 16 of the top golfers from every continent in the world, the new Volvo World Match Play Championship, scheduled for Autumn 2009, will offer official prize money of €3,250,000 (approx. US$5million / SEK30million) and together with vital Official World Ranking Points is certain to play an important part in the closing stages of the inaugural Race to Dubai.

Commenting on the new initiative at a special signing ceremony in Brussels, Per Ericsson, President & CEO of Volvo Event Management Golf, said, "Volvo is honoured to have been the driving force in the enormous strides taken by European golf over a generation and the inaugural Volvo World Match Play Championship will be our 113th title sponsorship in men's professional golf and the 69th European Tour event under Volvo's highly-respected stewardship."

Added Mr. Ericsson, who recently took over from Mel Pyatt who retired at the end of 2007, added "Clearly, the Race to Dubai changed not only the commercial landscape of European golf but also encouraged us to review our strategy and we are delighted to inherit not only the title sponsorship of this landmark championship but also proud to partner IMG and Finca Cortesín going forward with this unique and prestigious event.

"Innovation is a watchword with Volvo and we are also very excited with the creative evolution of the Volvo World Match Play Championship in general and in particular the manner in which the event now embraces each and every continent on the planet, including two firsts, ensuring that Asia, where Volvo and golf go hand in glove, will be involved and secondly taking this fine championship to Spain where the Volvo Masters has garnered such a huge following."

He added, "Volvo has enjoyed the longest-running and most mutually-beneficial relationship with The European Tour to date, a partnership we are delighted to be able to extend, whilst we look forward to establishing new partnerships with IMG and Finca Cortesín going forward into an exciting new chapter of the success story that is Volvo in golf.

He continued, "Volvo has contributed to and benefited from the inexorable rise of golf in Europe over the past two decades and this historic championship fits perfectly with our company values, Safety, Quality and Environmental Care and given that the 23 men who have won this great title have 68 ‘Majors' between them, and that Finca Cortesín already holds Environmental Protection Certificate ISO 14001, we are on very solid ground with the Volvo World Match play Championship."

Mr. Ericsson concluded, "Meanwhile, all-out focus will be on the 21st and final Volvo Masters and we are sure that is going to be an enormous success and an emotional send-off to a great championship," adding, "I would wish to pay tribute to Don Jaime Ortiz-Patiño for his great vision and to Felipe Ortiz-Patiño for continuing this unstinting support at Valderrama, without which the Volvo Masters would not have been the success story it became and we look forward to bowing out in style at the 21st and final Volvo Masters from 30th October - 2nd November 2008."

As a result of this commitment it has been confirmed by IMG that there will not be a 2008 edition of the World Match Play Championship.

Welcoming the new initiative, Arnold Palmer, winner of the inaugural World Match Play Championship at Wentworth in 1964 who regained the title in 1967, said,  "I take great pleasure each year in following the World Match Play event. It was yet another of Mark McCormack's fantastic ideas, and I remember being thrilled to win the inaugural event in 1964.  It has been fascinating to see how the event has evolved over the years. I am delighted that this great Match Play Championship continues to hold it's own on the international stage."

Speaking on behalf of third part of the triumvirate, Finca Cortesín, Vicente Rubio, General Manager of Singlehome, real-state company that owns Finca Cortesin, said, "We are delighted to be selected as the host venue for the forthcoming Volvo World Match Play Championship and to join with Volvo and IMG in bringing this great championship to Spain, indeed to Andalucia for the first time ever.

"Since we opened our golf course and its associated facilities have matured into what we now believe is one of the finest venues in Europe not only for our members and guests but also for major championships such as the Volvo World Match play Championship," he added.

Finca Cortesin's Hotel, Golf & Spa General Manager, Javier Reviriego added, "We are certain, Finca Cortesin will be a great challenge to the top players in the world participating in the event. We are proud of this partnership and hope that this Event helps Finca Cortesin establish itself as one of Europe's top Golf Resorts"

Spain's Sergio García, World Ranked No.8 commented, "It is fantastic that such a prestigious event as the World Match Play has chosen to move to a Spanish venue. Andalucía has gone from strength to strength as a golfing destination and I am sure that Finca Cortesín Golf Club hosting such an international and high profile event will further highlight to the golfing world the benefits of visiting Spain."

Guy Kinnings, Director, IMG Golf (EAME), added, "We are very excited to be working with Volvo as we enter this new era for the World Match Play. It is a very popular tournament and one we are very proud of and it plays a vital role in our portfolio of tournaments on The European Tour. For a tournament with such a long and successful history we are pleased to be able to add some interesting new changes and to introduce new elements as relate to the qualification criteria, format and venue and with the strong support and experience of Volvo and The European Tour we are confident that the tournament will go from strength to strength. We would also like to express our thanks to the Wentworth Club who have been such wonderful hosts to the World Match Play Championship these past 44 years."

With over 60 years of combined expertise in golf, IMG and Volvo have devised a new exciting and innovative playing format that will deliver the ultimate accolade to the unique concept of Match Play golf.

For images of the signing ceremony, please visit http://www.volvoinsponsorship.com/pages/media/

Keywords:
Special Interests, Sponsorship
Descriptions and facts in this press material relate to Volvo Cars' international car range. Described features might be optional. Vehicle specifications may vary from one country to another and may be altered without prior notification.
Media Contacts
Related Releases 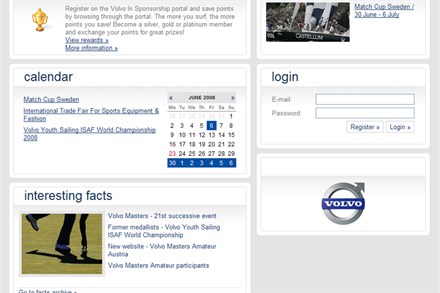