Volvo Cars has once again performed very well in the annual IIHS Top Safety Pick+ Awards. In this year's honours list four Volvo cars made the Top Safety Pick+ grade: the S60, V60, S80 and XC60. Volvo Cars was the only European brand with more than two models on the list.

“Volvo Cars' commitment to real-life safety and our Vision 2020, which states that no one should be killed or seriously injured in or by a new Volvo car, underlines our approach towards continuous improvement in this field. At Volvo Cars we focus on real-life safety - reflecting the many and varied causes and results of car accidents. It is of course a wonderful thing that we receive such honours and recognition for our advanced safety innovations from leading safety institutes,” said Dr. Peter Mertens, Senior Vice President Research & Development at Volvo Cars.

The Tops Safety Pick+ award criteria have grown tougher in the last twelve months, with increased demands around the standard for front crash prevention. To meet the new criteria cars making the Top Safety Pick+ grade must offer the ability to stop or slow down without driver intervention before hitting a target in IIHS tests at 12 mph, 25 mph or both.

Volvo Car’s front crash avoidance technology, City Safety, which is standard in all new Volvos, effectively helps to detect and brake automatically to mitigate or prevent a car to car rear end collision without driver intervention. Volvo’s City Safety technology has been shown to reduce insurance claim frequency by 16 percent*.

“Volvo Cars has received much recognition during its long history of safety driving the industry forward. A perfect example of this is the three-point safety belt, invented at Volvo in 1959 and now used globally by all car makers. With the sales start of the All-New XC90 in 2015 Volvo Cars will offer the world’s most advanced crash avoidance technology as standard,” said Thomas Broberg, Senior Safety Advisor at Volvo Cars.

IIHS did not test all Volvo Car models available in the U.S. market during 2014. The XC70 was not tested and the All-New XC90 had not been launched in time to participate.

Keywords:
Old S60, Old V60, Volvo XC60, 2015, S80 (2008-2016), Product News
Descriptions and facts in this press material relate to Volvo Cars' international car range. Described features might be optional. Vehicle specifications may vary from one country to another and may be altered without prior notification.
To view the full copyright information click here
Media Contacts
Related Images
Mar 26, 2014 ID: 141611 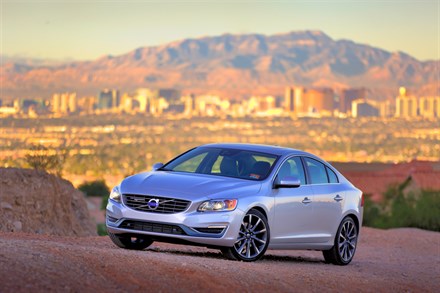