One of the worlds's most well known advocates for energy efficiency, Amory B. Lovins, chief scientist of the Rocky Mountain Institute in Colorado, will receive the Volvo Environment Prize at a ceremony in Stockholm November 1st. The Volvo Environment Prize (1.5 million SEK) is awarded by an independent foundation and the selection committee is comprised of internationally recognized scientists and researchers in the fields of economics and environmental studies.

For more than 30 years Amory Lovins has advocated a more efficient use of energy rather than increasing the production of it. He claims that sufficient energy exists for everyone to live and move about comfortably, provided that we do away with the wasteful energy practices of today.

He is more optimistic than most researchers regarding the possibilities to combat climate change.

"There might be major changes already under way that cannot be stopped - to the extent that is not true, the problem can readily be solved. If the countries of the world saved energy only two or three times faster than attentive companies do very profitably, the problem would be solved", says Amory Lovins

Together with his colleagues at the Rocky Mountain Institute, RMI, Amory Lovins has published numerous books and reports on energy efficiency. But they have also been involved in practical developments. In the beginning of the 1990's Lovins and his team developed an ultra light, super efficient concept automobile, "Hypercar". Nowadays they also work with energy efficiency in trucks.

The RMI's first building was created as a showcase of energy efficiency, using hardly any electricity from the grid. It was almost self sufficient thanks to solar energy and smart new technology that provided comfortable temperatures inside the building even in the cold winters of the Rocky Mountains.

"Energy efficiency has an enormous potential", says Amory Lovins. "The efficiency of converting coal at the power station into incandescent light in the room is about 3 %, and only 0,3 % of the fuel energy that we put in our cars actually moves the driver."

He is very optimistic about the future for energy efficiency. Many big companies have started programs to increase energy efficiency in business operations. Lovins and his team at the Rocky Mountain Institute now also functions as a consultancy for Wal-mart -the world's largest retailer - in order to increase their energy efficiency in stores and the supply chain. Lovins most recent book "Winning the Oil Endgame", was to large extent financed the American military headquarters Pentagon. The book contains a detailed roadmap for a complete phase out of oil in the US economy.

"Ultimately I think we could very well go to a mixture of electricity and hydrogen for all kinds of vehicles, including airplanes, and get even another big efficiency jump"

The Volvo Environment Prize annually awards 1.5 million SEK (Euro 160.000) to one or several individuals who have made an outstanding contribution to understanding or protecting the environment through scientific, socio-economic or technological innovation or discoveries of global or regional importance. Since it was first conferred in 1990 the Volvo Environment Prize has been awarded to 33 people. The laureates include many well known names, of which three are Nobel Prize winners.

Amory Lovins will receive the award from Prince Carl Philip during a ceremony at Nybrokajen 11 in Stockholm, Nov 1. A gala dinner for him and invited guests will take place at Grand Hotel in the evening. The day before, Oct 31, Lovins will participate at seminar at IVA, the Royal Academy of Engineering; he will be guest of honour at a reception hosted by US Ambassador Michael Wood and in the evening participate at a dinner at the Nobel Museum. On November 1st, he is invited to lunch with Minister of the Environment, Andreas Carlgren. Before coming to Stockholm Lovins will participate at seminars at Volvo and at Chalmers in Gothenburg.

The following material about the Volvo Environment Prize laureate Amory B. Lovins is available at

Keywords:
Environment, Events/Activities, Awards
Descriptions and facts in this press material relate to Volvo Cars' international car range. Described features might be optional. Vehicle specifications may vary from one country to another and may be altered without prior notification.
Media Contacts
Related Images
Aug 01, 2007 ID: 12779 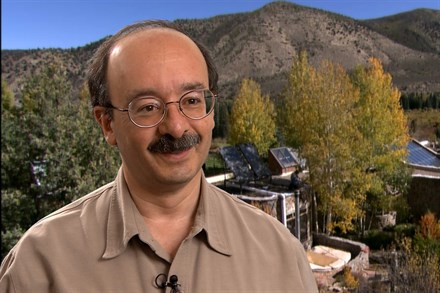