These results were published today in the FöretagsBarometern by Universum survey, an annual research study in which 21,000 university and college students in Sweden ranked the most attractive employers in Sweden.

“This is an important milestone for Volvo Cars which shows that we are moving in the right direction towards becoming a truly attractive employer,” says Hanna Fager, Senior Vice President Human Resources, Volvo Car Group.

The car industry is changing, and areas such as software, electrification and connectivity are become increasingly important. This development requires a new type of knowledge also within Volvo Cars.

“It’s fantastic that we are ranked so highly by our future engineers in Sweden. To meet the challenges we face today as well as in coming years, we depend on attracting talented employees,” says Hanna Fager.

Volvo Cars, which is currently undergoing an operational and financial transformation, has climbed steadily on Universum’s rankings in recent years. 2017 sees Volvo take the top position for the first time.

“Talents from the next generation are not just expecting a job, they are expecting a context where they can reach their full potential. To become an attractive employer in 2017, it’s not enough that you can just offer a salary on a competitive level and safe employment,” says Claes Peyron, head of Sweden at Universum.

Mr Peyron argues that this puts high demands on companies to offer a higher purpose and social engagement, to be innovative and preferably see each individual. “All this together means that as an employer in Sweden, you have to climb mountains every day to be considered an attractive employer,” he says.

Volvo Cars has in the last five years employed around 10,000 people globally, including over 2,000 engineers in Gothenburg, Sweden and recruitment is ongoing. For instance, the company is currently looking for hundreds of new software engineers to strengthen the development of next generation technologies within safety, autonomous driving and electrification. 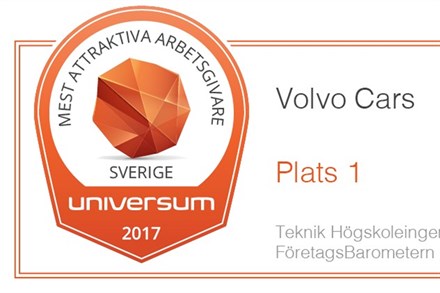