GÖTEBORG (January 4, 2006) – The Volvo C30 Design Concept, a sporty four-seat coupe with a glass tailgate and inspired styling, will make its world debut on the floor of the North American International Auto Show in Detroit on January 8, 2006.

The Volvo C30 Design Concept is an indication of what the new Volvo C30 will look like when it is unveiled in Paris in September, 2006.

The sleek, modern look of the C30 Design Concept is reminiscent of the Volvo Safety Concept Car (SCC) introduced in Detroit in 2002.

“Our aim was to give the Volvo C30 Design Concept a hefty dose of muscles in a sporty and compact package,” explains Volvo Cars Design Director Steve Mattin.

The dynamic front end is characterized by the angled headlamps and the low, wide grille. From a profile perspective, the well-defined wheel arches and the sloping roofline gives the car a fast silhouette. The impact is intensified by a contrasting combination of two colours (Quite White and Very Bronze) while the overall design is a clear evolution of the current Volvo design language.

The curvature of the coupe’s rear shoulders is very pronounced and further enhanced by the horseshoe-shaped tail light pattern and the glass tailgate.

“This glass tailgate is inspired both by the classic Volvo P1800 ES and the SCC concept car,” says Mattin. “The light pattern is so unusual that you’ll never be in any doubt of which car you have in front of you.”

The interior reinforces the sporty character of the Volvo C30 Design Concept. The individual rear seats offer generous legroom to allow the car to offer four full seats. The two rear seats have been moved slightly inward to give the passengers a sense of space and good visibility forward.

“The design showcases Volvo’s super-thin ‘floating’ centre stack, bringing it into full view from behind through the glass tailgate," says Mattin.

Space for all reasons

The Volvo C30 Design Concept envisions a customer who rarely requires the use of the rear seats. The luggage space behind the glass tailgate is designed for everyday loads such as briefcases and sports equipment – with the ability to swallow far larger loads when one or both rear seats are folded flat.

The Volvo C30 Design Concept can accelerate from 0-100 km/h in 6 seconds and has a top speed electronically limited to 250 km/h.

“A car that radiates muscular agility has to live up to its appearance once you slip behind the steering wheel,” says Håkan Abrahamsson, the C30 Project Director.

Descriptions and facts in this press material relate to Volvo Cars's international car range. Described features might be optional. Vehicle specifications may vary from one country to another and may be altered without prior notification.
Related Images
Jan 09, 2006 ID: 3386 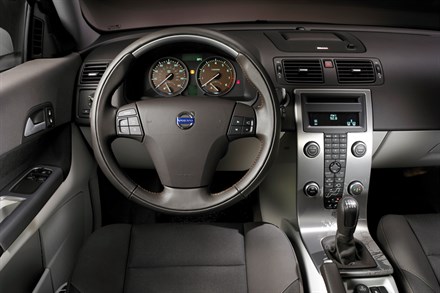