TORONTO, ON (December 20, 2012) - The Volvo S60 sport sedan can add another award to its list of accolades after the Insurance Institute for Highway Safety (IIHS) announced the winners of their new Top Safety Pick+ awards. The new S60 has been a Top Safety Pick since its re-introduction into the Canadian market for the 2011 model year.

In order to recognize 2013 models with superior crash protection, IIHS has created the Top Safety Pick+ award, the + indicating good or acceptable performance in the new small overlap collision test. The S60 was one of just three out of 11 midsize luxury cars evaluated in the inaugural round of small overlap tests to earn good or acceptable ratings.

Top Safety Pick+ winners must earn good ratings for occupant protection in at least 4 of 5 evaluations, with no less than acceptable in the fifth test. IIHS rates vehicles good, acceptable, marginal or poor based on performance in a moderate overlap frontal crash, small overlap frontal crash, side impact and rollover, plus evaluations of seat/head restraints for protection against neck injuries in rear impacts.

"Over the course of the company's prestigious history, safety innovation has always been paramount for Volvo," said Marc Engelen, president and CEO of Volvo Cars of Canada. "The comfort and wellbeing of our vehicles' occupants is of the utmost importance to us and something we work very hard to achieve so we are honoured that the S60 earned this new award from the IIHS."

Building on its long-running vehicle ratings program for consumer information, IIHS introduced the small overlap test in 2012 to further improve occupant protection in frontal crashes. In the test, 25 percent of a car's front end on the driver side strikes a 1.5m tall rigid barrier at 64 km/h. The test is designed to replicate what happens when the front corner of a car collides with another vehicle or an object like a tree or utility pole.

"Nearly every new car performs well in other frontal crash tests conducted by the Institute and the federal government, but we still see more than 10,000 deaths in frontal crashes each year," Institute President Adrian Lund says. "Small overlap crashes are a major source of these fatalities. This new test program is based on years of analyzing real-world frontal crashes and then replicating them in our crash test facility to determine how people are being seriously injured and how cars can be designed to protect them better. We think this is the next step in improving frontal crash protection."

The small overlap frontal test represents a severe crash. When cars strike the test barrier they tend to move sideways away from it, and the interior structures including the driver door, side window and windshield pillar move in the same direction. The dummy, however, continues forward into the path of the sideways-moving interior structures. At the same time, the steering column and driver airbag move inboard in many vehicles as the front end and occupant compartment deform. If the dummy misses the airbag or slides off it, its head and chest are unprotected.

Without airbag protection, people in real-world small overlap frontal crashes can sustain head injuries from direct contact with the windshield pillar, dashboard or window sill or by hitting trees, poles or other objects. Chest injuries happen when people contact the steering wheel, door or other intruding structures.

The Volvo S60 is available with active safety technology that is designed to avoid such a collision from ever happening in the first place. Lane Departure Warning (LDW) alerts the driver if the car runs across the lane markers without the turn indicator being used and

Collision Warning with Full Auto Brake (CWAB) will warn the driver of an impending collision with vehicles or static objects, even applying full braking force if a crash is imminent. With automatic braking, collisions can be avoided at speeds of up to 50 km/h and can significantly reduce the severity of accidents at higher speeds.

Volvo Cars of Canada Corp. is part of the Volvo Car Corporation of Gothenburg, Sweden. The company provides marketing, sales, parts, service, technology and training support to the 41 Volvo automobile retailers across the country. Volvo led the list of luxury car brands in the 2012 Top Safety Picks by the Insurance Institute for Highway Safety while the S60 sport sedan was one of only two luxury cars evaluated to earn a Top Safety Pick+, a new safety award that recognizes superior crash protection.

Keywords:
Old S60, Awards, 2013
Descriptions and facts in this press material relate to Volvo Cars's international car range. Described features might be optional. Vehicle specifications may vary from one country to another and may be altered without prior notification.
Related Images
Aug 14, 2012 ID: 45170 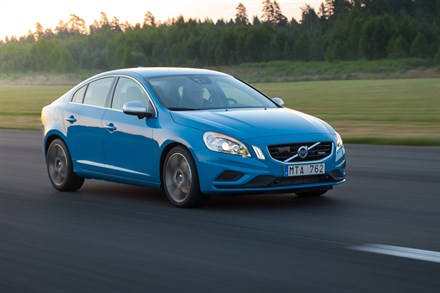