TORONTO, ON (Aug .14, 2012) -  The 2012 Volvo S60 is one of only three mid-size luxury and near-luxury cars out of the 11 evaluated to earn good or acceptable ratings in the Insurance Institute for Highway Safety's new small overlap frontal crash test. Wholly supported by auto insurers, the Insurance Institute for Highway Safety is an independent, non-profit, scientific and educational organization dedicated to reducing deaths, injuries and property damage from automotive collisions.

The Volvo S60 and the Acura TL earned good ratings, while the Infiniti G only earned an acceptable score. The Acura TSX, BMW 3 series, Lincoln MKZ and Volkswagen CC scored even lower, receiving marginal ratings and the Mercedes-Benz C-Class, Lexus IS 250/350, Audi A4 and Lexus ES 350 earned the ranking of ‘poor.' All cars tested were 2012 models.

In the test, 25 percent of a car's front end on the driver side strikes a 1.5m tall rigid barrier at 64 km/h. The test is designed to replicate what happens when the front corner of a car collides with another vehicle or an object like a tree or utility pole. "Nearly every new car performs well in other frontal crash tests conducted by the Institute and the federal government, but we still see more than 10,000 deaths in frontal crashes each year," Institute President Adrian Lund says. "Small overlap crashes are a major source of these fatalities. This new test program is based on years of analyzing real-world frontal crashes and then replicating them in our crash test facility to determine how people are being seriously injured and how cars can be designed to protect them better. We think this is the next step in improving frontal crash protection."

Most modern cars have safety cages built to withstand head-on collisions and moderate overlap frontal crashes with little deformation. At the same time, crush zones help manage crash energy to reduce forces on the occupant compartment. The main crush-zone structures are concentrated in the middle 50 percent of the front end. When a crash involves these structures, the occupant compartment is protected from intrusion, and front airbags and safety belts can effectively restrain and protect occupants. Small overlap crashes are a different story. These crashes primarily affect a car's outer edges, which aren't well protected by the crush-zone structures. Crash forces go directly into the front wheel, suspension system and firewall. It is not uncommon for the wheel to be forced rearward into the footwell, contributing to even more intrusion in the occupant compartment and resulting in serious leg and foot injuries. To provide effective protection in small overlap crashes, the safety cage needs to resist crash forces that aren't tempered by crush-zone structures.

Structurally, the Volvo S60 was best. With only a few inches of intrusion, the occupant compartment looked much the same as it did in a moderate overlap test. Reinforcement of the S60's upper rails and a steel cross member below the instrument panel helped to keep the safety cage intact. Volvo has performed similar small overlap tests as part of its vehicle safety development process since the late 1980s, taking the results into account when designing new models. "These are severe crashes, and our new test reflects that," Lund says. "Most automakers design their vehicles to ace our moderate overlap frontal test and NHTSA's full-width frontal test, but the problem of small overlap crashes hasn't been addressed. We hope our new rating program will change that."

The Institute's TOP SAFETY PICK award recognizes passenger vehicles that do the best job of protecting people in front, side, rollover and rear crashes based on ratings in Institute evaluations. The front rating is based on the moderate overlap test. The Institute plans to make the top award criteria more stringent by adding the small overlap frontal test to its battery of evaluations.

"We won't have evaluated many vehicles in the small overlap test in time for the 2013 award," Lund explains. "Models meeting the current award criteria still offer outstanding protection in most crashes, and they will continue to earn TOP SAFETY PICK in 2013. However, those vehicles that also do well in the new test will get to claim a higher award level that will be announced later this year."

Keywords:
Old S60, Awards, 2012
Descriptions and facts in this press material relate to Volvo Cars's international car range. Described features might be optional. Vehicle specifications may vary from one country to another and may be altered without prior notification.
Related Images
Aug 13, 2012 ID: 45195 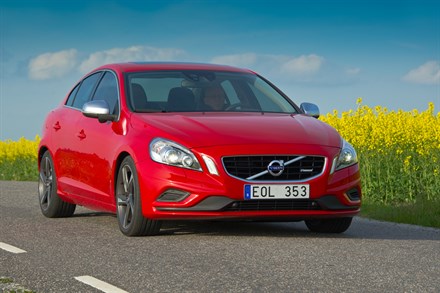