NIAGARA-ON-THE-LAKE, ON (October 27, 2011) - Volvo Cars of Canada Corp. is pleased to announce that journalist Mark Richardson has won the 2011 Volvo Award for Environmental Journalism.

Richardson received the award for his feature "All Change with the Chevy Volt," published in the Wheels section of The Toronto Star. The award was presented by Jeff Pugliese, President & CEO of Volvo Cars of Canada Corp. as part of the Automobile Journalists Association of Canada (AJAC) annual awards dinner in Niagara-on-the-Lake. Fellow automotive journalist Lesley Wimbush was acknowledged as runner-up for her story published on Auto123.com titled "An extraordinarily ordinary revolutionary."

"I would like to congratulate both Mark and Lesley for their efforts in reporting on environmental issues affecting the automotive industry," said Pugliese, who presented the awards Wednesday evening. "There were many strong entries this year, making a difficult decision for the panel of non-partisan judges. Adjudicators also noted an increased focus on electric vehicles, allowing readers to make more practical, informed choices."

Introduced in 1999, the Volvo Award for Environmental Journalism was created to encourage greater coverage of environmental issues as they pertain to the automobile industry. Greater coverage of these issues will lead to a consuming public that is better able to make informed decisions in their purchase of automobiles and auto services. Non-partisan judges look for the ability to make a complex subject understandable to the audience along with a high standard of reporting and writing. The Volvo Award for Environmental Journalism is open to writers, editors, broadcasters and Internet publishers who are members of AJAC.  Entries must have been published or broadcast in the year prior to the judging. Congratulations once again to Lesley and Mark.

Volvo Cars of Canada Corp. is part of the Volvo Car Corporation of Göteborg, Sweden. The company provides marketing, sales, parts, service, technology and training support to the 41 Volvo automobile retailers across the country. The company's product range includes the stylish and sporty C30, the elegant C70 hardtop convertible, the S40 sedan and the S80 flagship sedan. For customers looking for a vehicle with all-road capability, Volvo offers the versatile XC60, XC70 and XC90. The new-for-2011 S60 sport sedan lineup now includes the T6 AWD and T5 FWD, both offering Pedestrian Detection with Full Auto Brake. The S60 recently joined the 2011 S80, C30, XC60 and XC90 as a Top Safety Pick from the Insurance Institute for Highway Safety (IIHS).

Keywords:
Awards
Descriptions and facts in this press material relate to Volvo Cars's international car range. Described features might be optional. Vehicle specifications may vary from one country to another and may be altered without prior notification.
Related Images
Oct 26, 2011 ID: 40962 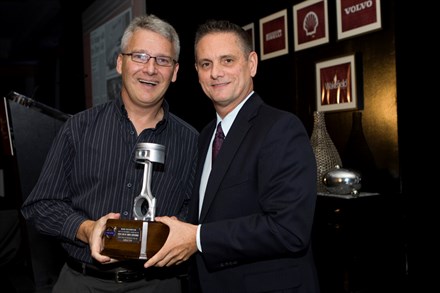