The pioneering engineer who created one of the automobile world’s most important safety innovations has been honoured in Europe for the simple device that has saved literally a million lives.

Nils Bohlin, the Volvo Car Corp. engineer who created the first three-point safety belt, was inducted into the 2006 Automotive News Europe Hall of Fame in February, nearly 50 years after his invention started a revolution in passenger safety. Bohlin died in 2002.

He was newly arrived at Volvo Cars from the aircraft industry when Bohlin created the first three-point belt in 1958. Volvo was the first car manufacturer in the world to fit the three-point safety belt in the front seats of the P120 (Amazon) and the PV544 in 1959, and the first manufacturer to equip its cars with the belt as a standard equipment.

Said Automotive News: “Bohlin's task was formidable. He engineered a simple solution that is the industry's most effective and widely-used life-saver: the three-point seat belt.

Almost 50 years later, the seat belt is standard equipment. Engineers have enhanced it, but Bohlin's basic design is unchanged.”

Indeed, the design has been adopted by every car manufacturer in the world, giving credence to the assertion that, “There’s a little Volvo in every car.” The 2006 Volvo line-up has three-point safety belts at all seating positions with pyrotechnic belt pre-tensioners that remove any slack in the belt during a collision.

Despite its proven record for saving lives and reducing injuries, a startling number of Canadians still fail to buckle-up. A recent survey by Transport Canada indicated that 90.5 per cent of all occupants of light vehicles in the country used safety belts. That number improves slightly for urban communities (91.1 per cent) and falls to about 86.9 per cent in rural communities, according to the 2004-2005 study. The National Occupant Restraint Program, a cooperative federal-provincial/territorial initiative to improve road safety, has set 95 per cent as its target for safety belt usage.

The front seat passengers of pick-up trucks had the lowest safety belt utilization at 84.8 per cent, the study said, and female occupants were more inclined to buckle-up than were males. Back seat occupants are less likely to be safely restrained than those in the front seat, according to the survey.

Detailed survey results are available at

There is no shortage of evidence to show that belts are effective in preventing deaths and injuries. Bohlin’s own study in Sweden following introduction of the belts was just the first testimony to their effectiveness: In a study of 28,000 collisions in Sweden, the belts were more than 60 per cent effective in saving lives and preventing injuries in collisions. That study became a key tool in encouraging seat belt legislation in many jurisdictions around the world.

Subsequent studies, including a 10-year look at Canadian statistics that said improved use of safety belts saved 3,400 lives and 77,000 injuries in the period 1989-1999, have shown the three-point belt to be the single most effective safety technology available in modern cars.

As far back as the turn of the century, automotive pioneers recognized the value of a restraint system that would aid passengers during a collision. Aircraft engineers, after the Second World War, worked with shoulder-lap belt designs but they were not comfortable and anchors for early belts were hazardous.

Bohlin’s design recognized that a truly effective harness would need to restrain both chest and lap, and fit automatically, without adjustment, in the most advantageous position. It would have to stay in position under extreme stress and be anchored low, alongside the wearer for maximum safety and comfort. The final design was innovative, simple and extraordinarily effective.

“Sometimes I get a call from some grateful person who has survived thanks to the belt. It warms my heart and shows that I really have been able to do something for mankind,” Bohlin told a reporter in 1999. Bohlin was 82 when he died in his native Sweden in 2002, the same day that his sons Gunnar and Jonas were in Akron, Ohio to attend their father’s induction into the National Inventors Hall of Fame (NIHF).

Keywords:
Safety
Descriptions and facts in this press material relate to Volvo Cars's international car range. Described features might be optional. Vehicle specifications may vary from one country to another and may be altered without prior notification.
Related Images
Sep 18, 2003 ID: 271 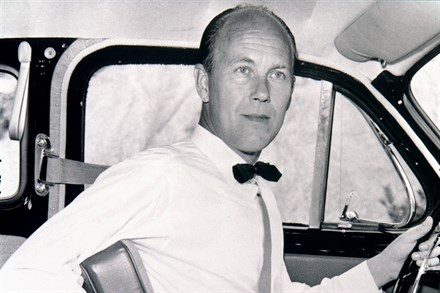