HALIFAX (Nov. 17, 2005) – Twenty-five years ago this week, two tired adventurers and their battered Volvo wagon completed a record-setting around-the-world driving odyssey – a trip that would eventually gain a spot in the Guinness Book of World Records, launch a career and a new company, and polish the Volvo reputation for durability and reliability around the world.

Tomorrow, adventure driver Garry Sowerby and his trusty 1980 Volvo 245 DL wagon will ride again through the streets of this port city to celebrate the anniversary of establishing the world’s record for circling the globe by car: 74 days, 1 hour and 11 minutes.

With navigator Ken Langley, Sowerby’s trip began and ended in Toronto and saw 26,738 miles (43,000 kilometres) registered on the Volvo’s odometer. Their quest (called Odyssey 77), took them across North America, through Australia, India, Pakistan, much of Europe, former Communist countries like Yugoslavia, and around Scandinavia, including a host of places that had vastly inferior roads, little infrastructure for visitors and no car service.

The trek not only spawned Sowerby’s Halifax-based adventure driving enterprise (he has since gone on to claim three additional world records), it put him and his remarkable Volvo on the cover of the Guinness Book of World Records, into a parade of auto shows and personal appearances on two continents, and a stint in the Petersen Automotive Museum in California.

The blue-and-white Volvo (known as “Red Cloud”), now with more than 450,000 kilometres on the odometer, has been for “a spa treatment” to be clean and shiny for the anniversary appearance. Other than washing and polishing, the car is little changed from its days of setting records. Powered by the rugged 2.1-litre Volvo B21A engine with a single SU carburetor, it utilizes a 4-speed manual transmission with electric overdrive to power the rear wheels. For its global tour, the wagon was outfitted with upgraded springs and shock absorbers, a revised exhaust, under-car protection, additional lights and little else.

More utility than luxury, the 245 wagon was one of the most popular models sold by Volvo in Canada in 1980 and was a staple part of the Volvo line from its introduction in 1974 through the close of production in 1993. Nearly 960,000 of the rugged 245 wagons were built during a period that helped establish the Volvo reputation for durability and reliability with generations of buyers.

“I can’t count the number of people who’ve told me their family had a Volvo wagon when they were growing up, or that they went off to college in a Volvo 245, or it was their first car,” says Larry Futers, vice president, sales, of Volvo Cars of Canada Ltd. “These cars helped create the loyal owners that have spanned the decades, and provided the foundation for popularity Volvo wagons enjoy today.”

“Since then, of course, we have added luxury, safety, convenience, style and performance to our wagons,” says Futers, “but we’ve never lost track of what made wagons popular in the first place – durability, reliability and versatility.”

To celebrate the 25th anniversary, Sowerby will tour Halifax (where the car was originally built) on Friday in a 7 hour, 41 minute, 11 second encore, with stops at places and events that represent the 21 countries on the original world tour. Following the tour, the car will be on display at Volvo of Halifax.

Keywords:
Life Style, Events/Activities
Descriptions and facts in this press material relate to Volvo Cars's international car range. Described features might be optional. Vehicle specifications may vary from one country to another and may be altered without prior notification.
Related Images
Nov 17, 2005 ID: 3362 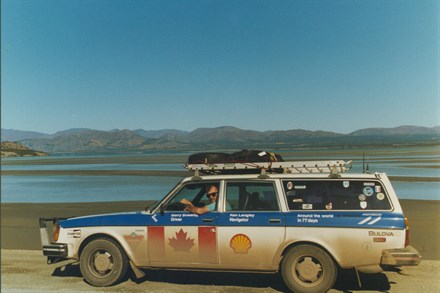 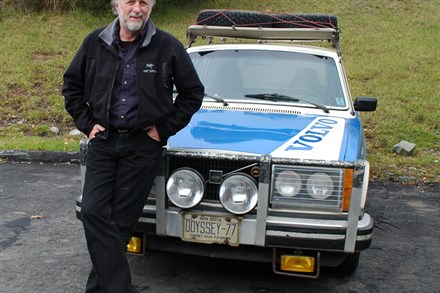