'TEAM CANADA' TAKES ON THE WORLD

‘TEAM CANADA’ TAKES ON THE WORLD

Four Canadians – dubbed “Team Canada” – made a strong showing against some of the world’s best amateur golfers at the Volvo Masters Amateur World Final this week. The finals took place at the Westin LaQuinta Golf Resort in Marbella, Spain, October 26–31 and marked the culmination of a summer-long, world-wide qualification process.

The Canadian delegation consisted of Jamie Armstrong, Ron Droeske, Kyle Koski and Allen McGee, all from Ottawa, Ontario. Team Canada members qualified this summer through the Volvo Golf Challenge, a series of 100 free qualifying events, hosted at some of Canada’s premier public golf courses. The two best-performing teams from each regional event were invited to the National Final held at The Club at Bond Head on September 28, 2005.

At the world finals, Armstrong led Team Canada by accumulating 58 points and finishing 23rd in a field of 71 players. Koski finished 28th with 56 points, McGee was 30th with 55 points and Droeske was 39th with 52 points. Zhang Changping, from China, won the amateur tournament with 79 points.

The Volvo Masters Amateur World Final has risen to become one of the most prestigious amateur golf events in the world. More than 75,000 amateur golfers from 22 countries competed for the 71 spots in the world finals.

In addition to participating in the two-day championship, players also attended two golfing clinics. Instructed by Manual Pinero – nine time European Tour winner, 1985 Ryder Cup champion and a winner of 2 World Cups – and Jeremy “Trick Shot King” Dale, the amateur golfers had an opportunity to improve their games with help from professionals. Players were also given access to a launch monitor, personalized instruction and five days of gala dinners and cocktail parties that embraced the Spanish culture.

As part of the festivities, all 71 amateur golfers witnessed the closing round of the Volvo Masters tournament at Valderrama on October 30. With Colin Montgomerie and Sergio Garcia tied for the lead going into the final event, tensions were high as Montgomerie tried to secure his ninth Volvo Order of Merit title. Garcia, on the other hand, was looking to capture the Volvo title that has continued to elude him. However, Paul McGinley’s final rounds of 66-67 allowed him to come from behind and take the title by finishing 10 under par, two clear of Monty and three clear of Sergio.

About the Volvo Golf Challenge presented by Bell

The Volvo Golf Challenge is a series of 100 free qualifying events, hosted at premier public golf courses from coast to coast. Teams of two pay a green fee at a host venues and compete in a two-person team Stableford competition in a gross or net category. The two lowest teams from each host site were invited to the National Final held at The Club at Bond Head on September 28, 2005.

Keywords:
Events/Activities, Special Interests
Descriptions and facts in this press material relate to Volvo Cars's international car range. Described features might be optional. Vehicle specifications may vary from one country to another and may be altered without prior notification.
Related Images
Nov 04, 2005 ID: 3336 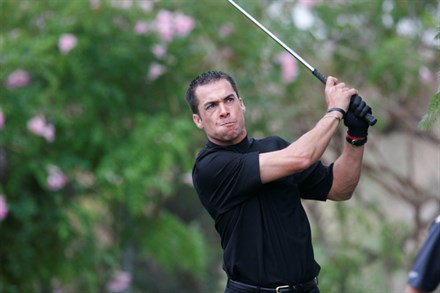 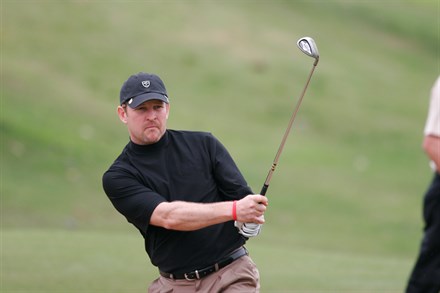