Safety beyond the crash:

A new program designed to train police, fire, paramedic and other emergency workers in how to deal with potentially dangerous automobile ‘safety’ equipment during a rescue is now available from Volvo Car Corporation.

Designed to protect lives, the sophisticated safety systems like air bags in a modern vehicle can themselves be dangerous to the rescuers if deployed inadvertently during attempts to extricate occupants trapped in badly damaged vehicles. To help train the professional rescue teams who work in close quarters with these safety systems, Volvo Cars of North America, LLC and Volvo Cars of Canada Ltd. have created a special manual which identifies the powerful safety technologies included in Volvo cars since 1987, and indicates how to disable them during the extrication of crash victims.

The new resource, called Guidelines for Emergency Personnel Attending Traffic Accidents, is available on-line from www.volvotechinfo.com. The document is a version of a similar manual first created by Volvo Cars in Sweden.

When a safety system has done its job, it is crucial that rescuers properly assess the scene and judiciously navigate the wreckage. “There are lots of instances where there has been a crash and the appropriate safety technology has done its job to protect occupants, yet the car is sufficiently damaged that passengers can’t get out,” explains Bruno DiGennaro, senior safety engineer for Volvo Cars of North America. “But not all safety systems are required in all crashes, and that can lead to dangerous situations when rescuers start working with victims in close proximity to ‘live’ air bags and other systems.”

It is particularly critical when rescuers start using powerful hydraulic and other cutting tools without first disabling the systems.

“A cutting tool or even a pry bar can set off a sensor which tells an air bag to deploy,” explains DiGennaro. “Rescuers working right next to a side impact bag or an inflatable curtain can themselves be injured. Fortunately, with the right knowledge, most of these systems can be disabled by the rescuers at the scene.”

“There are at least three generations of systems in Volvo vehicles on the road today, each more sophisticated and complex than the last,” adds DiGennaro. Some use pyrotechnic deployment and some use mechanical deployment. In many cases, disabling the system is as simple as disconnecting the battery, says DiGennaro. In addition to Supplemental Restraint System (SRS) driver and front passenger airbags, there are also Side Impact Protection System (SIPS) side airbags for upper body protection, Inflatable Curtain (IC) head protection systems, pyrotechnic seat belt tensioners and mechanical pop-up roll-over bars in various vehicles.

An auxiliary power source keeps the SRS airbags and some other systems ‘live’ for at least 10 seconds after the battery has been disconnected, the guide points out, and illustrates the location of each component of each system in all of the cars. The guide also advises rescuers how to deal with the powder they encounter from deployed airbags (it washes off with water) and discusses the issue of fires and airbags.

The companies will contact the agencies involved through their professional associations, DiGennaro says, and invite them to the website where the manual is available in electronic form. VCNA is also considering a printed version of the manual.

“Safety is a core value at Volvo, and that extends to more than just the people who drive our vehicles,” DiGennaro concludes. “With a little preparation, we can also help protect the skilled people who rescue the victims of crashes, too.”

Keywords:
Safety, Special Interests
Descriptions and facts in this press material relate to Volvo Cars's international car range. Described features might be optional. Vehicle specifications may vary from one country to another and may be altered without prior notification.
Related Images
Jul 12, 2005 ID: 2831 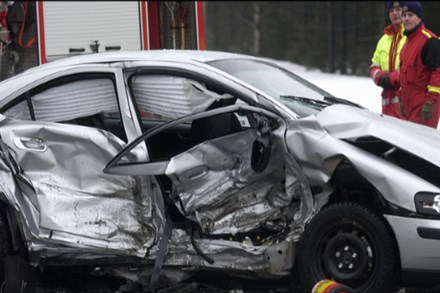