RICHMOND HILL, ON (Wednesday, September 30, 2020) - The Volvo XC40 Recharge luxury compact SUV, the first pure electric vehicle from the Swedish carmaker, has been selected as a 2021 North American Utility of the Year semi-finalist. It is the seventh Volvo in six years to be in the running for the prestigious award.

The XC40 Recharge is everything customers expect from a Volvo, with the addition of a state-of-the-art, fully electric all-wheel drive powertrain that offers a projected range of over 320 kilometres on a single charge and output of 402 horsepower. The large, 78 kWh battery can be fast-charged to 80 percent of its capacity in approximately 40 minutes on a DC fast-charger system of up to 150 kW under optimal charging conditions.

The XC40 Recharge is also the first Volvo that will receive software and operating system updates over the air*, placing Volvo Cars at the forefront of automotive connected services. The fully electric XC40 will keep evolving and improving over time, rather than it being at its peak when it leaves the factory.

Volvo is not new to the North American Car of the Year competition, with two wins and three podium finishes since 2016. The XC90 luxury mid-size SUV and XC60 luxury compact SUV won in 2016 and 2018, respectively. The S60 luxury compact sedan and V60 wagon were finalists in 2019 and the S90 luxury mid-size sedan was a 2017 finalist. Prior to that, the first-generation Volvo XC90 was named 2003 North American Truck of the Year.

“We are very proud to be in the running for yet another North American Car of the Year award,” said Anders Gustafsson, SVP Americas and President and CEO, Volvo Car USA. “The XC40 Recharge is a bold, expressive choice for consumers who are passionate about the future of our planet.”

Over the next five years, Volvo Cars will launch a fully electric car every year, as it seeks to make all-electric cars 50 percent of global sales by 2025, with the rest hybrids. Recharge will be the overarching name for all chargeable Volvos with a fully electric and plug-in hybrid powertrain.

“We have said this several times before: for Volvo Cars, the future is electric,” said Håkan Samuelsson, Chief Executive, Volvo Car Group.

The XC40 Recharge and the Recharge car line are also tangible proof points towards the company’s ambition to become a climate-neutral company by 2040. Read more about Volvo Cars’ climate plan HERE.

Keywords:
Corporate News, XC40 Recharge, 2021, Product News
Descriptions and facts in this press material relate to Volvo Cars's international car range. Described features might be optional. Vehicle specifications may vary from one country to another and may be altered without prior notification.
To view the full copyright information click here
Media Contacts
Related Images
Oct 16, 2019 ID: 259200 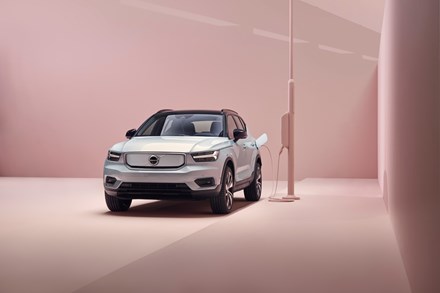 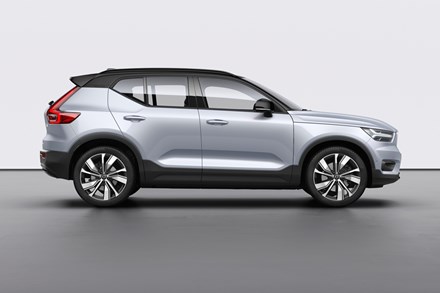