City Chase is a national series of one-day (6-hour) races that send teams on a madcap scramble that tests their physical skills and their ingenuity as they rush to complete tasks as varied as hitting 100 golf balls in a row to searching out a rare dried mushroom in a local retail shop as TV cameras capture all the action.

In its inaugural 2004 summer season, the innovative City Chase competition registered approximately 1,800 2-person teams for regional events in seven major Canadian cities. Competitors chart their own course through the city where they must complete a minimum number of challenges (called ChasePoints) and cross the finish line as quickly as possible.

“Volvo Cars of Canada saw a perfect fit between the new Volvo V50 sportswagon and the high-adrenalin, highly-competitive City Chase competition,” said Larry Futers, Vice President of Marketing with Volvo Canada. “The company is happy to continue the business relationship and we all look forward to being a part of the entertaining competition.”

In each regional competition, the top teams move on to the national championships to represent their home town. Winning the championship rewards each contestant with the two-year lease of a Volvo V50 2.4i.

Highlights of the 2004 City Chase season and the national championships in Victoria, B.C., were captured on film as the teams made their way toward the finish line. A documentary was produced and will be aired on Saturday, November 27 at 10:30 A.M. (local time) on Global Television.

As presenting sponsor, Volvo Canada will provide the V50 leases as a grand prize to the winners of the national championship. Additionally, the company will provide funding support and support vehicles to allow event organizers to manage the competitions.

The 2005 City Chase season is set to begin May 7, 2005, in Victoria, B.C. and then travel east across the country. The national championships will be held September 16-18, 2005, in a location that will be announced at a later date.

Keywords:
Events/Activities, Special Interests
Descriptions and facts in this press material relate to Volvo Cars's international car range. Described features might be optional. Vehicle specifications may vary from one country to another and may be altered without prior notification.
Related Images
Nov 25, 2004 ID: 2494 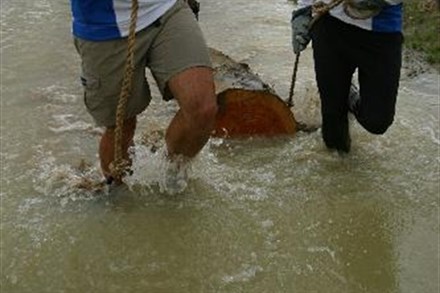