The new 2011 Volvo C70 that will be introduced at the Frankfurt Motor Show September 15 will reveal a new front end, rear end and minor changes to the interior design. The vehicle will continue to offer a three-piece retractable hardtop, seating for four and world-class safety. With the mid-cycle refresh, Volvo Car Corporation intends to heighten the desirability factor of the vehicle.

"The Volvo C70 has classic convertible lines and a strong identity of its own," explains Fedde Talsma, Exterior Chief Designer at Volvo Cars. "What we have done is to carefully redesign the front and rear so they harmonize more with both today's and tomorrow's Volvo models. We have also increased the exclusiveness of the materials and trim details to enhance the atmosphere of luxury and enjoyment inside the car."

As with the current model, the refreshed C70 will be powered by a 2.5-litre, turbocharged 5-cylinder engine delivering 227 horsepower and 236 lb.-ft. of torque.  Power is delivered to the front wheels through a 6-speed manual or 5-speed automatic transmission.  The vehicle will be available in Canada in the first half of 2010 and pricing will be announced closer to launch.

With its new front, the Volvo C70 reveals design traits from the S60 Concept Car that was unveiled at the Detroit Auto Show in early 2009 and will more closely resemble the design language of the larger vehicles in the Volvo Cars model range

Bodywork details such as the front fenders have been redesigned. The nose is more wedge-shaped and has been given three-dimensional depth by moving some elements both longitudinally and vertically. The new headlamps and the décor around the fog lamps, for instance, have been offset, angled up and rearward, at the same time, the detailing of the lower grille has been enhanced.

High-tech LED lamps, of the same type found on the Volvo XC60, are the most noticeable update at the rear. The entire lamp unit highlights the oval design cue that frames the new C70's rear panel.

Similar to the front, new lines and details in the bumper and elsewhere have been integrated to emphasize the depth and dynamism of the design language.

The exclusive new instrument panel, with gauges and graphics specific to the C70, are yet another example of how the car's premium feel has been emphasized further.

"We've focused the new interior features around the driver to give the owner a stronger perception of being rewarded behind the wheel. The seats are upholstered in a new type of soft hide and there is even better detail finish to make driving a more pleasurable experience than ever before," continues Talsma.

The new Volvo C70 has been engineered as one of the safest convertibles on the market, providing both preventive and protective safety. The car has an advanced body structure and several features that are unique in the convertible segment. For collision protection, the lack of a fixed roof has been compensated by structural reinforcements and sophisticated technology.

Protection in a roll-over

The Volvo C70 has sturdy metal hoops that extend behind the rear seat passengers to create added protective survival space should the car roll over. These hoops, which are part of the Volvo Rollover Protection System (ROPS) are activated by a gyro-sensor. Since the Volvo C70 has a glass rear window, the hoops have small spikes that will break the glass to guarantee proper protective function if the roof is up.

One important part of the side-impact and rollover protection is the inflatable curtain, which are installed in the doors. The curtain has an extra-stiff design featuring twin rows of offset panels that help it remain upright and protect the head if the windows are open. What is more, the curtains deflate slowly, helping to provide added protection should the car roll over.

In addition to the inflatable curtains on either side, the front seat occupants also have side-impact airbags. The side airbags are large enough to shield both the chest and hips. What is more, the inflatable curtain interacts with the belt pre-tensioners to contribute to the best possible protection for front seat occupants in a side impact or rollover situation. All four seats come with safety belt pre-tensioners.

Keywords:
C70, 1997
Descriptions and facts in this press material relate to Volvo Cars's international car range. Described features might be optional. Vehicle specifications may vary from one country to another and may be altered without prior notification.
Related Images
Sep 01, 2009 ID: 20480 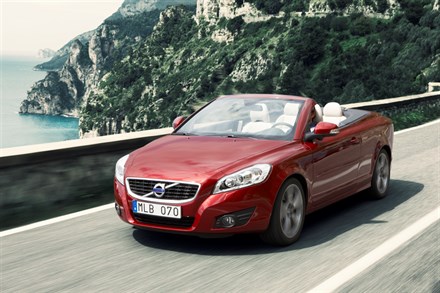 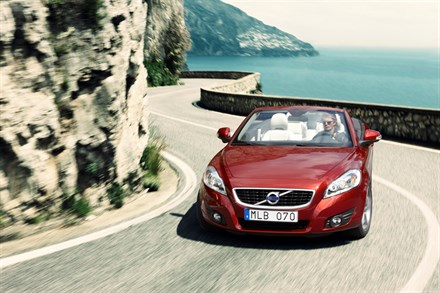 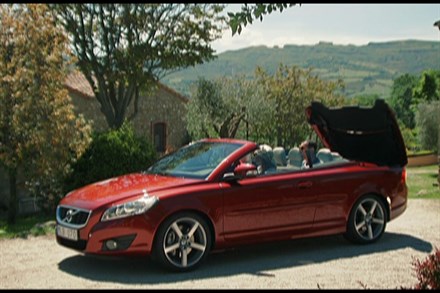 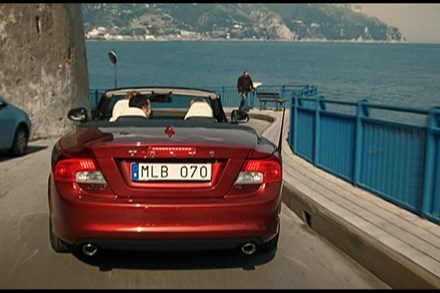 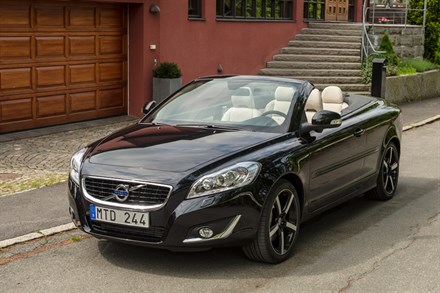