The Crash-Test Dummy family does invaluable work in the development of tomorrow's ever-safer vehicle. Each of the dummies cost up to 1.5 million kronor ($200,000 CAD), and at Volvo Car Corporation there are more than 100 members of this tough family.

The crash-test dummy is involved in a wide range of research and development projects in automotive safety. With a vast array of sensors, Volvo Cars' safety experts learn how a real human would be affected in a collision.

"It's very difficult to develop crash-test dummies," says Lotta Jakobsson, biomechanics and technical specialist with the Safety Centre at Volvo Cars. "The aim is to create as close a resemblance to a real human being as possible. At the same time, however, it has to be a tough tool. One highly successful example dates from the 1990s when Swedish researchers developed a crash-test dummy for rear-end collisions. This dummy, which features a very detailed spine, is now used the world over to evaluate whiplash injuries."

At Volvo Cars, the Crash-Test Dummy family is structured around 19 concept "members" - eight adults and 11 children, the smallest is the size of an infant weighing 3 kilograms.

Each family member is replicated in differing configurations for different purposes, making a grand total of more than 100 dummies. The family is large because it is necessary to include both children and adults of different ages and sizes in many different collision scenarios.

The first crash-test dummies were developed in the mid-1960's and were fairly simple in their design. Today, there are many different types of crash-test dummy - European, American and individual designs for specific frontal, rear or side collisions.

In order to further the development of crash-test dummies around the world, researchers are now working on an industry-wide standardized side-impact dummy. This particular project has been on going for more than 10 years, illustrating how advanced and complicated a measurement tool a crash-test dummy is.

Dummy inspections needed
Most crash-test dummies undergo five collisions before it is time for recalibration. During the calibration process, broken parts are replaced and the dummies are inspected and adjusted to prepare them for new tests. For safety engineers, it's critical that the dummies behave consistently in each test, necessitating regular calibration.

Thanks to regular maintenance and inspection, crash test dummies are almost indestructible. The true veterans at the Volvo Cars safety centre are more than 30 years old and have been involved in hundreds of serious collisions.

Every collision is preceded by days of precise preparations as the dummies are set-up. There are approximately 100 measurement points on each dummy used to register the forces exerted on the dummy's head, neck, spine, chest, hips and legs during the collision sequence.

The information provided by the dummies is stored and each test undergoes a thorough evaluation. This allows the engineers to study in detail how much force the dummy withstood and how the forces were distributed during the collision. Thanks to biomechanical research, the engineers can determine how much physical stress various parts of the human body can withstand before suffering serious injuries.

Today, researchers rely increasingly on virtual crash-test dummies which only exist in computer programs. With virtual dummies, it is easier to alter weight and height and thus make it possible to replicate a wider range of body styles.  However, Volvo Cars safety engineers expect the conventional, battle-hardened crash-test dummies will live on for a long time, working side by side with their virtual cousins.

Keywords:
Safety
Descriptions and facts in this press material relate to Volvo Cars's international car range. Described features might be optional. Vehicle specifications may vary from one country to another and may be altered without prior notification.
Related Images
Aug 13, 2003 ID: 7964 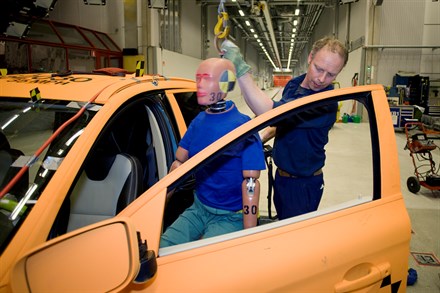