The new 2010 Volvo XC60 crossover will have a manufacturer's suggested retail price that starts at $45,495 and will go on-sale in April of 2009. For that price, the XC60 will come with a performance-oriented 281-horsepower turbocharged engine, All-wheel drive, a 6-speed automatic transmission, leather seats and City Safety - the world's first low-speed automatic braking system as standard equipment.

Retailers across Canada will be able to conduct City Safety tests in a controlled environment for people who are interested in taking the XC60 for a test drive.

City Safety is active at speeds below 30 km/h and utilizes laser sensors mounted on the windshield near the rear-view mirror to monitor up to 10 meters in front of the XC60. If a collision with a vehicle in front becomes imminent and the driver takes no action, City Safety automatically applies up to 50 percent braking power.  If the speed differential between the XC60 and the vehicle in front is less than 15 km/h, it's possible that a collision can be avoided. With a speed differential between 16 km/h and 30 km/h, the goal is to reduce the collision severity as much as possible.

"Collisions below 30 km/h are, unfortunately, very common," said Jeff Pugliese, President and CEO of Volvo Cars of Canada Corp. "In fact, up to 75 percent of all collisions occur at such low speeds. Volvo's collision research has also shown that in approximately half of all low-speed collisions, the driver doesn't brake or steer to avoid the vehicle in front. This is where City Safety can play an important part in making Canadian roads safer."

Pugliese adds that situations where City Safety could activate include stop-and-go traffic, parking lots and following another vehicle into an intersection. Aside from vehicle body and structural damage from low-speed collisions, occupants of both vehicles can incur whiplash injuries that could require substantial time for recovery.

Pugliese says: "City Safety is a technologically-advanced system that activates abruptly at the last possible second when a collision is imminent. But, if the driver applies the brakes, accelerates or turns the steering wheel, City Safety will not activate.  It's designed only to engage when it determines the driver is taking no action to avoid an imminent collision."

While City Safety represents a major step forward in automotive safety research and development, the XC60 also represents the next step in the company's design evolution. The XC60 has been styled to deliver expressive road presence with a combination of concave and convex body panels, a prominent Volvo iron mark logo in the grille, aggressive shoulders, a dynamic profile, instantly recognizable LED front position lights and unique tail lights.

In profile, the lower half of the XC60 exudes the rugged performance of the company's XC-range of vehicles while the top half has been designed to mimic the appearance of a coupe.

For the interior, the driver will find a console - including the company's now-familiar floating centre stack - angled slightly toward their seat. The rear seats fold flat in 40/20/40 sections and the front passenger seat can also be folded for cargo versatility. For customers looking to personalize their vehicle, the XC60 can be ordered with either two-tone or single-tone leather seats.

Launching with one engine, the XC60 will be equipped with a 3.0-litre, in-line six cylinder turbocharged engine, delivering 281 horsepower and 295 lb-ft. of torque. The engine is mated to a 6-speed automatic transmission with Geartronic and All-wheel Drive with Instant Traction.

The list of standard safety features can be categorized into three sections: personal security, preventive safety and protective safety.  Personal security includes features such as an alarm system, laminated glass and Home safe and Approach lighting that illuminates the area around the vehicle to help the driver see potential hazards.  Preventive safety starts with City Safety and includes braking aids such as ABS and Electronic Brake Distribution, a Dynamic Stability and Traction Control System, headlamp washers and the Volvo Roll Over Protection System.

Protective safety systems help occupants in a collision. The XC60 features a host of systems, including a body structure composed of four different kinds of high strength steel to help distribute collision energy around the passenger cabin, a full complement of front, side and side curtain airbags, the Volvo Whiplash Protection System, Side Impact Protection System and a collapsible steering column.

Factory options for the XC60 have been separated into three packages and can be complemented with a host of stand-alone features.

The Tech Package ($4,100) includes the Volvo Collision Avoidance System (CAS). CAS is composed of an Adaptive Cruise Control system that utilizes a radar to maintain a pre-determined time interval to the vehicle in front and Collision Warning with Auto Brake that is active at speeds above the limit of City Safety that warns the driver of an imminent collision and applies up to 50 percent braking power if no action is taken. It also includes a Lane Departure Warning and a Driver Alert system that monitors the vehicle's path between lane markings to warn the driver if the vehicle inadvertently crosses lane marketing and to determine if the driver is distracted or falling asleep. It also includes Distance Alert which visually warns the driver if the time interval to the vehicle in front is less than the pre-determined minimum. The Tech Package also includes the company's camera-based Blind Spot Information System and a Personal Car Communicator with Keyless Drive that allows for keyless operation and determining at a distance of 100 meters if the vehicle is locked, unlocked, if the alarm has been activated and - through a sensitive microphone - if a human heartbeat is detected inside the vehicle. Rounding out the Tech Package is retractable mirrors and a Premium Sound system that includes 12 speakers from DynAudio, Dolby Pro Logic II Surround processing and a 650-watt digital amplifier.

The Luxury Package ($3,050) adds features such as the Volvo Four-C active chassis that allows the driver three suspension settings to provide an increasingly firmer (or more comfortable) ride, Active Bending Headlights that swivel up to 15 degrees in response to steering wheel position and vehicle speed, front and rear audible parking assist, a rain sensor for the windshield wipers and heated rear seats or dual-stage integrated booster seats.

Finally, the Convenience Package ($2,100) includes Homelink, rear power child locks, adjustable speed-sensitive steering, cargo area grocery bag holder, clean zone interior air quality system, power-operated tailgate, sunglass holder as well as an interior mass movement sensor and level sensor connected to the vehicle's alarm system that responds to movement inside the vehicle or if one end of the vehicle is being lifted into the air.

Keywords:
Volvo XC60, 2010
Descriptions and facts in this press material relate to Volvo Cars's international car range. Described features might be optional. Vehicle specifications may vary from one country to another and may be altered without prior notification.
Related Images
Jan 19, 2009 ID: 18371 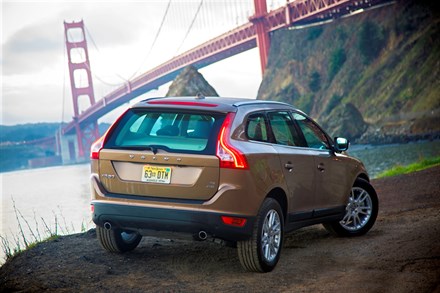 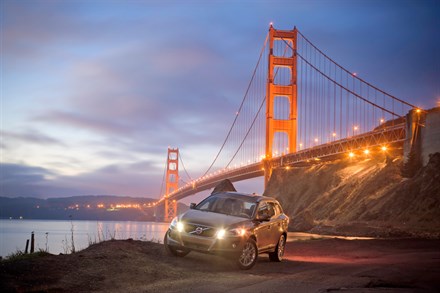