The Whiplash Protection System (WHIPS), developed by Volvo Car Corporation, was introduced 10 years ago and has since been proven to reduce the risk of soft tissue neck injuries - the most common of all traffic injuries - by approximately 50 percent.

"The Volvo S80 was the first car with WHIPS," says Lotta Jakobsson, safety expert and one of the people behind the development of WHIPS at Volvo Cars. "That was back in 1998 and by 2000 WHIPS was fitted as standard in all of Volvo's front seats. The system has undergone continuous refinement and development over the years and this year we are actually celebrating its tenth birthday."

In a rear-end impact, immense force may be exerted on the occupant's neck. The body is pushed forward and if the head does not accelerate together with the body, the neck tissues can be over-stretched. Symptoms of whiplash include neck pain, headaches and stiffness in the neck muscles. These symptoms usually disappear after a few weeks but in some cases they may last considerably longer.

"Proper whiplash protection should reduce the head's movement in relation to the upper body," explains Jakobsson. "The relative movement between different body parts should be as little as possible. Our unique WHIPS protection system has therefore been designed to distribute the incoming forces along the entire back and head and to dampen the path of the force by moving with the body."

The front seat backrest accompanies the body's movement backward and tilts to the rear relative to the seat cushion. This reduces the force being exerted on the back and neck. The seat and head restraint is positioned close to the head and high up, improving head support.

"WHIPS has been shown to be a very effective form of protection in rear-end collisions," relates Jakobsson. "Our own surveys show that the risk of sustaining long-term pain as a consequence of a rear-end impact is halved. Several external studies reveal similar results."

Decades of development
Since the early 1970s, the Volvo Accident Research Team has analysed real-world traffic collisions around the world to improve automotive safety. The team of experts soon realised that neck injuries were common in rear-end collisions. A project was launched to develop a system to protect the vehicle's occupants from whiplash injuries. The result was a sturdy head restraint positioned high up against the head. Since the 1970s, Volvo vehicles have always been fitted with head restraints in the front seats.

During the 1980s and '90s several collision analyses and studies were undertaken together with medical experts to determine how the vehicle could provide better protection for the neck in a rear-end impact.

"In the early 1990s we developed what was at that time a unique computerised model of the human body," explains Jakobsson. "With the help of this model and our knowledge of real-life collisions, we could study the effects of different seat parameters on the spine's movement patterns. WHIPS was developed on the basis of these research results."

Specially built crash test dummy helps the researchers
Jakobsson also explains that Volvo Cars was one of the companies to develop a crash test dummy to test rear-end collisions. Referred to as BioRID, this dummy mimics the human body's reaction to rear-end collision forces. Measurements taken on the dummy's neck enable safety engineers to determine the probable risk of injury in a similar collision.

The BioRID dummy was developed by the Swedish automotive industry and Chalmers University of Technology at the end of the 1990s. This unique dummy, which has since become an industry standard, has now had a production run of almost 100.

"Our crash test dummy has had a huge effect on development since we can now conduct impact tests that are very authentic," says Jakobsson, who was the project manager on the BioRID development project. "The insurance industry has been using the dummy for the past five years to evaluate seats. Recently, even EuroNCAP started using it in its rating system for seat protection against whiplash injuries."

Preventive safety systems are also highly effective
"Low-speed impacts from the rear are very common," says Jakobsson. "Statistics reveal that more than 75 per cent of reported collisions take place at speeds below 30 km/h. In more than 50 per cent of these collisions, the vehicle at the rear does not brake at all before hitting the vehicle in front. Here we have immense improvement potential. If we can help the driver brake in scenarios in which he or she is distracted, we will be able to save many necks. We are offering City Safety as standard in our latest model, the XC60. If the driver is about to drive into the vehicle in front and does not respond in time, the XC60 brakes automatically. The system is active at speeds below 30 km/h. Our aim is to ultimately develop vehicles that never collide. Until that vision is realised, however, we are proud to be able to offer one of the world's most effective protection systems against whiplash injuries."

Keywords:
Safety, Technology, Historical
Descriptions and facts in this press material relate to Volvo Cars's international car range. Described features might be optional. Vehicle specifications may vary from one country to another and may be altered without prior notification.
Related Images
Mar 04, 2008 ID: 14634 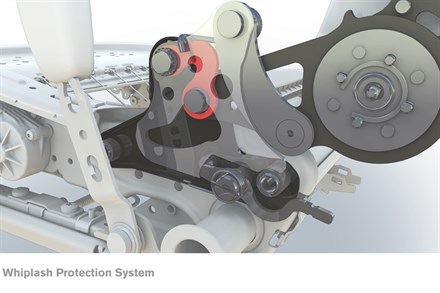 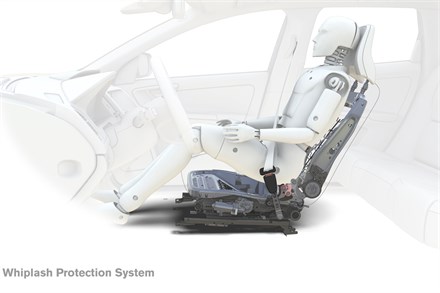 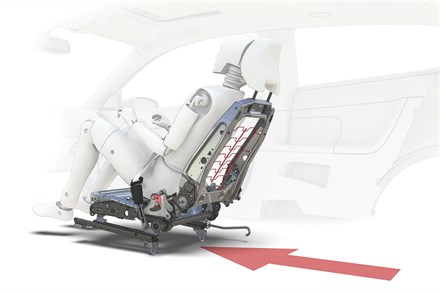