The exterior design of Volvo Car Corporation's new entry-level premium sedan, the Volvo S40, is an evolution of Volvo's traditional design language. But the S40's interior is nothing short of a design revolution.

Volvo Car design director Henrik Otto says both were inspired by classic Scandinavian design with its clean shapes and open surfaces, airiness and interplay between form and function.

Otto says the S40's exterior was designed to express power and performance, which it achieves with crisp, sporty lines and a short hood and pronounced cab-forward profile. This eager stance creates a sensation of speed even when the car's at a standstill.

The new Volvo S40 is 48 millimetres shorter than its predecessor, but at the same time is 54 mm wider and 44 mm taller, creating more interior space

The lengthened track (plus 63 mm in front, plus 57 mm in rear) and wheelbase (plus 78 mm) virtually put a wheel at each corner. This contributes to its sporty appearance and contributes to stable on-the-road behaviour. The long wheelbase also makes it possible to fit conveniently wide rear doors.

The cab-forward design, long wheelbase and transverse engine architecture combine to give the new Volvo S40 a spacious cabin, which can be rearranged in the same flexible manner as larger Volvo models. The rear seat splits into two sections and the backrests fold down. The front passenger seat can also be specified with a fold-flat backrest. With the seats folded down, the load floor is entirely flat.

The Volvo S40 can be equipped with several sport trim packages, including sporty alloy wheels and low-profile tires.

Although it has its own distinct character, there's no chance of mistaking the S40 for anything but a Volvo. The grille with its familiar diagonal has a horizontal mesh pattern in a dark-grey metallic colour, echoing the Volvo S60 and S80. The hood has the traditional V-shape. The body's contour lines - the classic Volvo 'shoulders' along either side of the body - are also inherited from the rest of the Volvo family.

Those broad shoulders are a modern Volvo feature that signal power and safety. From the rear, the distinctive taillamps show with clarity that what lies ahead is a Volvo.

Inside the S40, Otto and his team introduce an entirely new approach to interior design - with a unique stand-alone free-floating centre stack. This is a new approach in the car industry, developed for the new Volvo S40 and previewed recently in the Volvo VCC (Versatility Concept Car).

The centre stack elegantly links together the tunnel console with the instrument panel, which has a clean, uncluttered layout, with air vents and other details positioned as islands in an otherwise free area. The instrument panel, which features two round gauges surrounded by contrasting metal bezels, also has a new type of surface, a texture conveying a feel of cutting-edge technical innovation.

The controls in the new centre stack have an ergonomic and functional design. The top half of the control panel is used to operate the audio system and the integrated phone, while the lower half controls the climate system. The audio system can be specified with the Dolby Surround Pro Logic II, the same high level of car audio technology that was introduced in the Volvo XC90.

A number of discreet lighting points create an overall effect of theatre lighting, with soft illumination of various parts of the interior. The centre stack, for instance, is constantly illuminated from the roof, so softly and gently that the light does not distract the driver.

Keywords:
S40, Interior, Events/Activities, Special Interests, 2005
Descriptions and facts in this press material relate to Volvo Cars's international car range. Described features might be optional. Vehicle specifications may vary from one country to another and may be altered without prior notification.
Related Images
Sep 18, 2003 ID: 1640 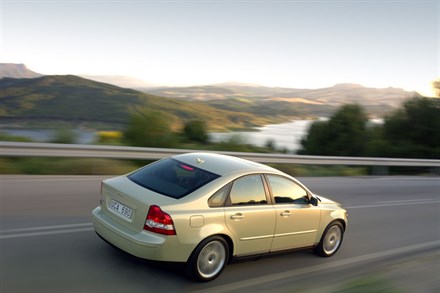