The world’s foremost vehicle safety conferences, the International Technical Conference on the Enhanced Safety of Vehicles (ESV) will take place in Volvo Cars’ hometown this year, effectively bringing the discussion of vehicle safety home to where it first began.

The conference, organized by the United States’ National Highway Traffic Safety Administration (NHTSA), is internationally focused with participating governments, carmakers, academia and other interested parties from across the globe.

The main focus of the conference will be the presentation of scientific papers, government status reports and workshops aimed at taking vehicle safety to the next level.

“The fact that the conference is being held in Volvo Cars’ hometown of Gothenburg this year is no coincidence. Volvo Cars is a clear leader in the field of vehicle safety research. Our ongoing commitment to developing real-world safety solutions that save lives is well known. Our longer term goal is to create cars that do not crash. In the short term our vision is that no one will be seriously injured or killed in a new Volvo car by 2020, and we remain confident that we can achieve this,” said Dr Peter Mertens, Senior Vice President Research & Development at Volvo Car Group.

Volvo Cars will demonstrate its leadership in safety by contributing in several areas during the conference, including the presentation of papers on subjects as diverse as the effectiveness of advanced driver assistance systems, the response of muscles in the human body in pre-collision situations, driver distraction guidelines and run off road accidents. The Swedish car maker will also cover the new safety systems launched in the XC90 and participate in a plenary session with Volvo Cars’ Head of R&D, Dr Peter Mertens.

The 24th International Technical Conference on the Enhanced Safety of Vehicles (ESV), organised by SAFER, will take place June 8-11 in Gothenburg, Sweden.

Keywords:
Product News
Descriptions and facts in this press material relate to Volvo Cars's international car range. Described features might be optional. Vehicle specifications may vary from one country to another and may be altered without prior notification.
To view the full copyright information click here
Related Images
Aug 26, 2014 ID: 150087 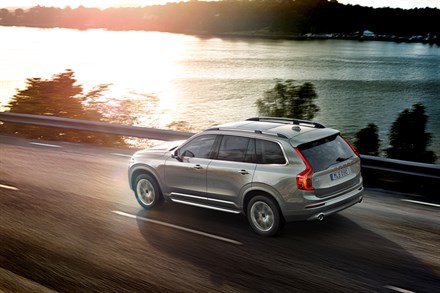