The Volvo S80, the flagship sedan in the line-up of products offered by Volvo Cars of Canada Corp., will offer more powertrain choices to customers, including an optional 281-horsepower T6 engine, for 2009.

Replacing the 2008 S80 3.2 AWD, the 2009 line-up will start with an S80 with a 235-horsepower 3.2-litre in-line 6-cylinder engine driving the front wheels and have a manufacturer's suggested retail price of $49,995. Customers looking for an S80 with all-wheel drive will find the new 281-horsepower, turbocharged in-line six-cylinder T6 engine with a price of $56,495. At the top of the range is the 311-horsepower S80 V8 Executive Edition (refer to separate press release for additional details) for $64,995, replacing the 2008 S80 V8. All S80 vehicles are equipped with a 6-speed automatic transmission with Geartronic.

While based on the 235-horsepower 6-cylinder engine, the new T6 engine is slightly smaller but includes an advanced turbocharger for the increase of 46-horsepower. Displacing 3.0-litres, the T6 delivers 295 ft.-lbs of torque from 1,500 to 4,800 rpm for quick acceleration and smooth drivability.

All S80 models will also be equipped with Bluetooth wireless mobile phone connectivity for the 2009 model year. The T6 will be equipped with a sunroof, a 160-watt 8-speaker audio system and Sirius Satellite Radio as standard equipment.

From the options list, the optional Navigation System ($2,500) has been enhanced with Real Time Traffic updates. In Toronto, Montreal and Ottawa (Vancouver will be added in late 2008), Volvo vehicles equipped with a Navigation System will be better able to avoid traffic by customizing their drive route around known obstructions that have been digitally transmitted to the system's receiver.

The optional $2,250 Dual Screen Rear Entertainment System (RSE) has also been updated for 2009. The screen has been enlarged by 43 percent and offers increased resolution, contrast and a brighter display for better visibility during daylight. The wireless headphones can now be folded for easier storage.

A lifetime of research in one car

With more than 80 years of safety research - both in laboratories such as the Volvo Cars Safety Centre and in the real world with the Accident Investigation Team - the S80 represents all of the accumulated automotive safety knowledge the company has acquired.

Regardless of which S80 is chosen, each vehicle is equipped with the same level of protective safety. Examples include: a body structure composed of four different kinds of steel designed to distribute collision energy around the passenger cabin and multi-stage front, side and inflatable curtain airbags to help protect occupants. In rear collisions, the S80 is equipped with the company's WHIPS whiplash protection system.

With the launch of the S80 in 2007, Volvo Cars began offering vehicles with more advanced preventive safety systems to help buyers avoid a collision. Aside from the now standard technologies such as ABS and Dynamic Stability and Traction Control, the S80 offers a Collision Avoidance Package (CAP). CAP utilizes long-range radar and a short-range digital camera to deliver a Collision Warning system with Auto Brake that will visually and audibly warn the driver of a potential collision and autonomously apply up to 50 per cent braking power should a collision become imminent, Lane Departure Warning, Distance Alert to help maintain a safe distance to the vehicle in front and Driver Alert to evaluate the driver's control of the vehicle and warn them if there is increased likelihood they are asleep or distracted. The S80 can also be equipped with the company's camera-based Blind Spot Information System (BLIS).

Security features include a security system as well as approach and "Home Safe" lighting to illuminate the area around and in front of the vehicle to bring attention to any hazards, such as ice. The optional Personal Car Communicator (standard on the S80 V8 Executive) takes security a step further. While offering keyless entry and drive, the Personal Car Communicator (PCC) can also - within 100 metres of the S80 - notify the driver if the car is locked, unlocked, if the alarm was activated and if a heartbeat has been detected inside the vehicle at the press of a button. Beyond 100 meters, the driver can check if the "lock" button was pressed when the sedan was left.

Stand alone options include the Navigation System and Rear Seat Entertainment System as well as a choice of two 18-inch wheels ($1,250).

Keywords:
S80 (2007), 2009
Descriptions and facts in this press material relate to Volvo Cars's international car range. Described features might be optional. Vehicle specifications may vary from one country to another and may be altered without prior notification.
Related Images
Jan 21, 2008 ID: 13920 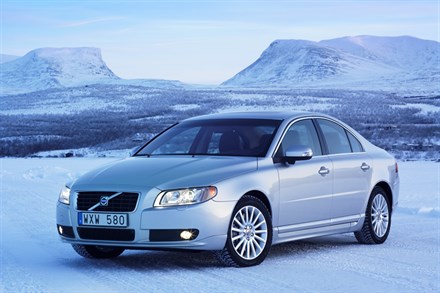 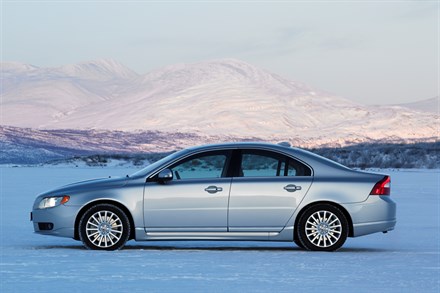 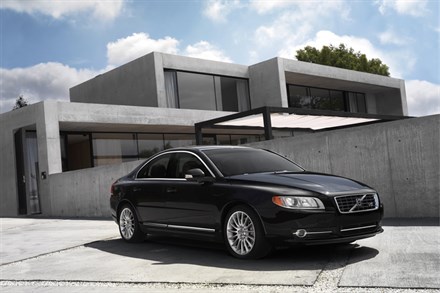