Toronto, ON. December 2nd, 2014. The Automobile Journalist Association of Canada (AJAC) announced this year’s “Best New” category winners for the 2015 Canadian Car of the Year Awards. Winning the 2015 Best New Sports – Performance (over $50k) category was the 2015 V60 Polestar. The two other finalists that finished behind the V60 Polestar in voting were the Ford Mustang and Dodge Challenger SRT Hellcat.

“Volvo Canada is thrilled to accept the award in sports performance on behalf of the impressive V60 Polestar,” said Marc Engelen, President & CEO of Volvo Cars of Canada. “The Polestar models are both high-performing and practical, offering versatility that does not go unnoticed; this award is added proof of its distinction and representation of automotive excellence.”

The event in which each vehicle was measured was at the annual “TestFest” held in Niagara Falls, Ontario this past October. The testing process was held during a five-day evaluation with more than 70 automotive journalists participating.

Keywords:
Old V60, 2015, Product News
Descriptions and facts in this press material relate to Volvo Cars's international car range. Described features might be optional. Vehicle specifications may vary from one country to another and may be altered without prior notification.
To view the full copyright information click here
Related Images
Dec 05, 2014 ID: 155042 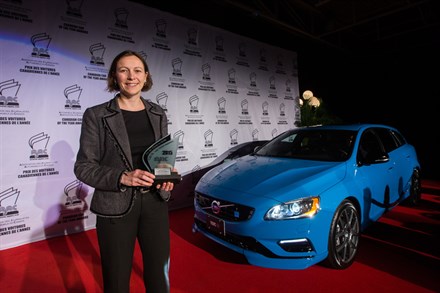