There is a group of women in California who are very proud of their contribution to the new Volvo XC90 sport utility vehicle, and they don't even work for the Swedish car company.

Chances are, most of them don't yet own an example of what Volvo Car Corporation describes as "the next generation SUV." Never mind; they have a pride of authorship that comes from being a major influence in the development of a vehicle that has not only broken new ground in safety, style and versatility, it has addressed the needs of an entire generation of female drivers.

"At an early stage in the project, we identified women in North America as an important and influential buyer group," says Tord Forsgren, part of the XC90 project team, from his office in the Volvo Car headquarters in Göteborg. "This group is in an environment far from ours here in Sweden, and we realized that we needed to know and understand these potential customers much better. So we established a consumer panel of female buyers as a sounding board." The group was recruited from Southern California, where there was already a well-established SUV market. It was also near the Volvo Car Corporation Concept & Monitoring Center in Camarillo, California, where the company maintains its North American design group.

The original panel, convened in 1999, was composed of 24 women. They represented a wide range of women, all with demanding schedules: attorney, business owner, mother, actress, consultant, etc. The group was enthusiastic about their involvement from the start. Over the next two years, 16 returned to the panel to follow the progress of the vehicle through various phases of development and to pass judgment on the designs and features that they saw. The project team eagerly took notes.

The first meeting was held in the panel moderator's home, over dinner. The group talked about competitive products and the issues that concerned them: the need for a more car-like SUV, their desire for greater interior comfort for the long hours they spent in their vehicles; sophisticated and sleek designs that didn't intimidate, flexible interior designs that can be used with ease. Their main safety concern was roll-overs among SUVs, while their environmental concerns centred around fuel economy.

"In the first meeting, we listened to how they lived and used their cars, what they liked and disliked," explains Forsgren. The designers and project managers used the information in defining the concept for XC90.

Doug Frasher, lead designer on the project, recalls one particular conversation with a panelist. "This woman said she wanted a design that was sleek, and I asked her what that meant to her. She traced a line in the air with her hand, and the look of it stuck with me. It became my reference for the line of the A-pillar."

In the fall of 1999, the panel got a preview of the XC90 design, with digital animations of design features in video form. "At that stage, we had a lot of ideas and we returned to the panel to get their qualitative judgment - input that guided us later in the design work," Forsgren remembers. The panelists now had specifics to consider. Respondents with very young children appreciated the sliding middle child seat in the second row, and how the second and third row seats folded flush into the floor. The 70/30 split tailgate was a unanimous hit. Extra storage space under the front seats also drew rave reviews.

In November of 2000, the group convened in a hotel ballroom to see a full-size prototype. The design was nearly ready for production. "When we felt ready with the design, we returned to get confirmation that we were on the right track," says Forsgren. Despite the time that had elapsed since their introduction to the project and the growing negative publicity over SUV design, the group confirmed their interest in SUVs in general and this one in particular. They were still seen as fun to drive and comfortable with great utility - "an extra closet," said one. They loved the sculptured hood of the XC90 and described the design as "sleek," "sophisticated," "elegant," and even "sporty." They characterized it as a good balance between rugged and elegant. The split rear tailgate was seen as a direct result of their enthusiasm for it during a previous meeting and highly appreciated.

Finally, as XC90 began production, the group got to drive XC90 prototypes. "They were quite excited," Forsgren recalls.

"The great value was their help to screen and develop the many ideas that always come up in a new car project," he adds. "For example, the dialogue with the panel definitely encouraged us to make the investment to develop the centre child seat in the second row, the two-way opening tailgate, the infotainment system, the choice of colours, upholstery materials, décor, cup-holders and even safety systems."

"In retrospect, one interesting phenomenon is that women don't necessarily want a feminine design language," recalls designer Frasher. "An SUV is looked upon as a protecting companion; one that should never let them down."

While virtually every car company uses consumer panels for some form of feedback, there is no question in the minds of project team that input from the California women who consulted on XC90 helped refine the appeal of the first Volvo SUV.

With the needs of female buyers and drivers a prime consideration in the development of new models, how long will it be before cars are designed for women, by women?

That's a question Volvo Car Corporation is already examining. At the recent Geneva international auto show, the company announced that a team of women engineers, designers and managers is developing a concept car under the internal working name of MCC - My Concept Car. Last year, the concept and pre-sketches were presented to the company's senior management. Approval to develop the concept car was given and work has begun.

"Like everyone at Volvo Cars, we naturally aim our car at customers who demand premium products. Still, we believe that women and men prioritize differently. This is why all the decisions on the MCC are being made by women," says Eva-Lisa Andersson of the Product Development department.

"We have gathered skills and ideas from hundreds of women within Volvo and enjoy their strong support. Virtually everyone - men and women - shows great interest in the concept car," adds Elna Holmberg of Chassis Development.

Now that two dozen volunteers in California have helped shape an award-winning SUV, the female engineers, designers and safety experts inside Volvo Car Corporation are ready to take up the challenge.

Keywords:
XC90 (2002-2014), Special Interests, 2003
Descriptions and facts in this press material relate to Volvo Cars's international car range. Described features might be optional. Vehicle specifications may vary from one country to another and may be altered without prior notification.
Related Images
Sep 18, 2003 ID: 1106 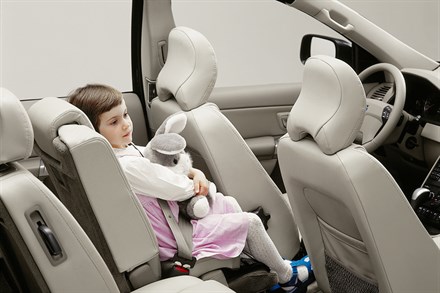 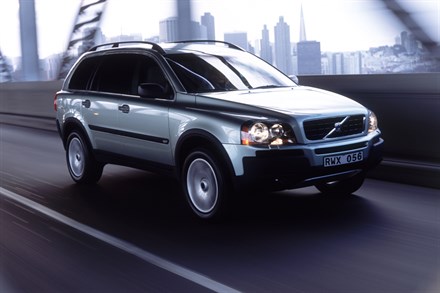