TORONTO, ON (Nov. 6, 2013) – In a testament to Volvo’s longtime commitment to passenger protection, the 2014 Volvo XC90 luxury SUV earned a TOP SAFETY PICK+ from the Insurance Institute for Highway Safety (IIHS), the Institute’s top safety award.

To earn TOP SAFETY PICK+, a vehicle must pass a series of crashworthiness evaluations, including the small overlap front test — a real-life scenario that replicates what happens when the front corner of a vehicle strikes another vehicle or an object.

“Small overlap collisions at high speeds can be quite common and are often very severe,” noted Marc Engelen, President and CEO Volvo Cars of Canada. “Volvo's crash testing research has addressed these crash scenarios through real-world investigations because our commitment to safety is at the core of our values.”

In its evaluation of the XC90’s performance, IIHS noted:

“The XC90’s structural performance was good in the small overlap front test, and the driver’s space was maintained well,” said IIHS in a released statement. “While many vehicles have had to undergo significant structural changes to earn good ratings in the small overlap test, the XC90 has had the same basic platform since 2003.”

Since its launch, Volvo’s XC90 luxury SUV has won acclaim from legions of satisfied customers while receiving many awards internationally. The XC90 upholds a legacy of safety, such as its pioneering introduction of the world’s first Roll Stability Control.

An all-new XC90 will debut at the end of 2014 and go on sale in early 2015. It will feature Volvo’s next-generation safety and driver-support technologies, including Pedestrian Detection in Darkness and Road Edge and Barrier Detection with Steer Assist.

“In a competitive marketplace where every brand tries to stake its own claim to safety, Volvo continues to affirm our leadership,” added Engelen. “We very much appreciate the attention IIHS gives to real-life scenarios such as small overlap collisions and are proud of the XC90’s performance.”

The XC90 is the third Volvo model to earn the TOP SAFETY PICK+ accolade since the Institute began testing for small overlap protection in 2012. The 2013 Volvo S60 luxury sedan and 2013 XC60 crossover each earned the prestigious honor during earlier tests.

Volvo Cars of Canada Corp. is part of the Volvo Car Group of Gothenburg, Sweden. The company provides marketing, sales, parts, service, technology and training support to the 38 Volvo automobile retailers across the country. The S60 and XC60 are among only 18 vehicles that were awarded the prestigious new Top Safety Pick+ by IIHS (Insurance Institute for Highway Safety).

Keywords:
XC90 (2002-2014), 2014, Product News
Descriptions and facts in this press material relate to Volvo Cars's international car range. Described features might be optional. Vehicle specifications may vary from one country to another and may be altered without prior notification.
To view the full copyright information click here
Related Images
Nov 06, 2013 ID: 135470 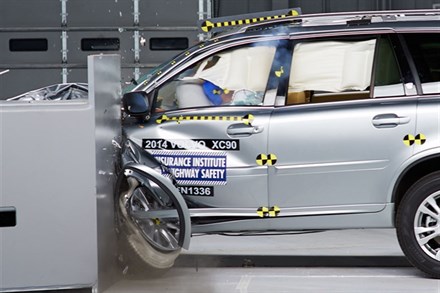