The project, funded as part of a European Union research project, included Imperial College London as the academic lead partner along with eight other major participants. Volvo was the only car manufacturer in the project. The project team identified a feasible solution to the heavy weight, large size and high costs associated with the batteries seen in hybrids and electric cars today, whilst maintaining the efficient capacity of power and performance. The research project took place over 3.5 years and is now realized in the form of car panels within a Volvo S80 experimental car.

The material is recharged and energized by the use of brake energy regeneration in the car or by plugging into a main electrical grid. It then transfers the energy to the electric motor which is discharged as it is used around the car.

The new plenum demonstrates that it can also replace both the rally bar, a strong structural piece that stabilizes the car in the front, and the start-stop battery. This saves more than 50% in weight and is powerful enough to supply energy to the car’s 12 Volt system

Keywords:
Product News
Descriptions and facts in this press material relate to Volvo Cars's international car range. Described features might be optional. Vehicle specifications may vary from one country to another and may be altered without prior notification.
To view the full copyright information click here
Related Images
Sep 24, 2010 ID: 35027 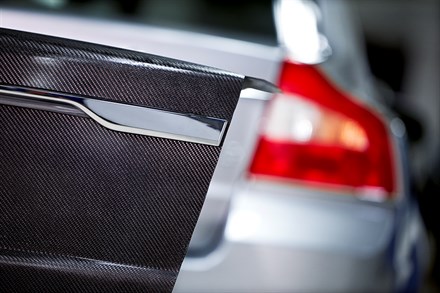