A world first... Filters hydrocarbons and nitrogen oxides from the surrounding air and powered by solar cells when the car is parked

Emissions from today's engines are in many cases cleaner than the surrounding air, particularly in polluted city centres. In the Versatility Concept Car (VCC), Volvo Car Corporation presents entirely new technology that exploits this fact by filtering the surrounding air from the presence of two environmentally hazardous substances: hydrocarbons (HC) and nitrogen oxides (NoX). The technology is called VAAC, Volvo Ambient Air Cleaner.

The basis of VAAC is a container installed in the engine compartment, into which two filters are placed. While driving, the car's ventilation-system fan sucks in air from the surroundings and directs it through the filters, which traps the nitrogen oxides and hydrocarbons. Thereby also cleaning the air in the passenger compartment.

In order to increase the VAAC system's efficiency, the Versatility Concept Car is equipped with a sensor that monitors when ambient air has reached a given level of pollution. It then activates the fan in response. This happens regardless if the car being used or not, since solar cells mounted on the roof power the ventilation-system fan even when the car is parked. The system can thus absorb hydrocarbons and nitrogen oxides even with the car's engine switched off.

The VAAC system can operate continuously for two days during normal urban conditions before the filters are filled and dispatch their contents to the engine. "VAAC requires a well-functioning, modern engine for the system to work efficiently," explains Jan Karlsson, project leader for VAAC development at Volvo Cars. "With an engine of SULEV standard (Super Ultra Low Emission Vehicle), the Versatility Concept Car neutralizes the hydrocarbon emissions produced by up to three other cars, and thus helps clean up the surrounding air."

PremAir® is the name of Volvo's renowned "ozone eater" and it too is an important part of the overall pro-environmental profile of the Versatility Concept Car. Ground-level ozone is formed through a combination of air pollution and sunlight. It can cause headache and respiratory problems among humans and may also stunt plant growth. Volvo was the first car manufacturer in the world to directly deal with the problem of ground-level ozone through the introduction of PremAir®, back in 1999. The car's radiator is coated with a catalytic layer that converts up to 75% of the surrounding ground-level ozone into oxygen as it passes through the radiator.

Keywords:
VCC, Auto Shows, Technology, Events/Activities, Special Interests, Concepts
Descriptions and facts in this press material relate to Volvo Cars's international car range. Described features might be optional. Vehicle specifications may vary from one country to another and may be altered without prior notification.
To view the full copyright information click here
Related Images
Sep 18, 2003 ID: 1319 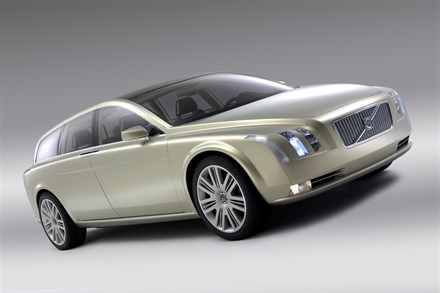