GÖTEBORG (August 28, 2007) -- Studies by Volvo Car Corporation show that up to 90 percent of all traffic collisions are caused by driver distraction.

In an effort to reduce this statistic, Volvo Cars will introduce Driver Alert Control (DAC), a technology that is a world-first in passenger cars. The system aims to alert the driver when their concentration level is affected, a condition that can occur during long journeys. Another new system, Lane Departure Warning (LDW), alerts the driver if the car crosses one of the road markings without an obvious reason.

LDW and DAC will be part of one option package, called Driver Alert System. It will be available in the Volvo S80, V70 and XC70 in 2008.

"Real life safety is the key to our safety philosophy," says Ingrid Skogsmo, Director of the Volvo Cars Safety Centre. "When it comes to preventive safety, we have the same approach as when we develop protective systems. In other words, that our research and technical development focus on areas where new technology can create significant results in real-life-traffic."

Based on the collision statistics, Volvo Cars is developing technology to help drivers avoid or reduce the severity of accidents caused by distraction and driver fatigue.

As a result of extensive studies on how drivers operate behind the wheel, Volvo Cars has developed DAC - a world-first innovation that monitors the vehicle's progress on the road and alerts inattentive drivers.

Driver fatigue is a major traffic-safety problem around the world. According to the U.S. National Highway Traffic Safety Administration, drivers who fall asleep at the wheel cause approximately 100,000 collisions annually in the United States, resulting in 1,500 fatalities and more than 70,000 injured drivers and passengers.

The situation is similar in Europe. The German Insurance Association, GDV, estimates that about 25 percent of all fatal accidents on the German Autobahn are caused by driver fatigue.

As a result, the Volvo DAC is an important innovation. It is primarily intended for situations where the driver's risk of losing concentration is the greatest and where a collision would have severe consequences. For example a straight, smooth road that lulls the driver into a sense of relaxation and where the risk of distracting activities or falling asleep is higher. The system steps in at 65 km/h and stays active as long as the speed exceeds 60 km/h.

Registers what's happening on the road

DAC monitors the car's movements and assesses whether the vehicle is being driven in a controlled or uncontrolled way. This method is unique among vehicle manufacturers and is very reliable.

"We do not monitor human behaviour - which varies from one person to another - but instead the effect that fatigue or decreased concentration has on driving behaviour," explains Daniel Levin, project manager for Driver Alert Control at Volvo Cars. "Our system is based on the car's progress on the road. It gives a reliable indication if something is likely to go wrong and alerts the driver before it is too late."

DAC can also react to situations where the driver is focusing too much on their cell phone or children in the vehicle, and not paying full attention to the road ahead.

"This is a positive side-effect of our concept, and this is possible since the system evaluates driving behaviour rather than human behaviour," says Levin.

From a technical viewpoint, DAC consists of a camera, a number of sensors in the car and a control unit. The camera, installed in the windscreen ahead of the rear-view mirror mount, continuously measures the distance between the Volvo vehicle and the road lane markings as the sensors register the vehicle's movements. The control unit stores the information to calculate whether the driver risks losing control of the vehicle.

"It is, of course, always the driver's responsibility to take a break when necessary, but sometimes you might not realize that you're not alert enough to drive," says Levin. "In such situations, Driver Alert Control can help the driver make the right decision, like taking a refreshing break or a nap, before the concentration level becomes too low."

On US Highways, single-vehicle road departures account for approximately one fourth of all collision and one third of all fatalities, statistics that emphasize the risk of losing concentration in smooth, steady driving conditions. Volvo Cars looks to address this by introducing Lane Departure Warning. The system helps prevent single-vehicle road departure incidents as well as head-on collisions due to temporary distraction.

Volvo Cars' researchers estimate that the LDW system can help prevent 30-40 percent of these types of collisions at speeds above 70 km/h.

LDW is activated via a button on the centre stack and it alerts the driver with a gentle warning sound if the vehicle crosses one of the road markings without an obvious reason such as use of the turn indicator.

The system also uses a camera to monitor the vehicle's position between the road markings. LDW begins operating at 65 km/h and stays active as long as the speed exceeds 60 km/h.

Some of the described systems' availability depends on the number and quality of visible road markings. The lane markings must be clearly visible for the camera. Poor light, fog, snow and extreme weather conditions can make the system unavailable.

Descriptions and facts in this press material relate to Volvo Cars's international car range. Described features might be optional. Vehicle specifications may vary from one country to another and may be altered without prior notification.
Related Images
Aug 28, 2007 ID: 12140 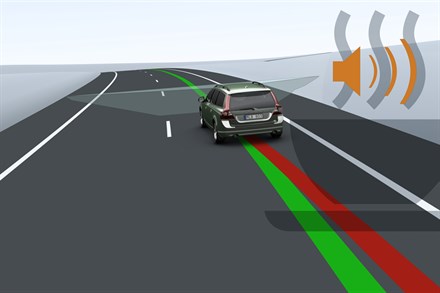 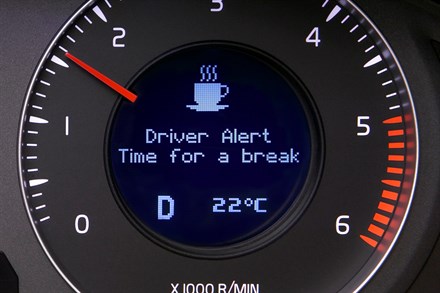