VOLVO REVEALS LOCATION OF THIS YEAR'S BURIED TREASURE: THE BOTTOM OF THE DEEP BLUE SEA

THE BOTTOM OF THE DEEP BLUE SEA

Volvo Car Corporation sinks treasure chest filled with $50,000 in gold and the key to a new XC90 "Somewhere in the World" and gets ready to launch online treasure hunt

(IRVINE, Calif., April 25, 2007) - Somewhere in the world, Volvo Car Corporation has sunk real treasure - a chest filled with $50,000 worth of gold doubloons plus a key to a brand new Volvo XC90 - and will soon be taking would-be pirates on a virtual high seas adventure to find it. Volvo's online treasure hunt will begin May 4, involve participants from 22 countries and is inspired by the Pirates of the Caribbean: At World's End movie that hits theatres May 25.

Last summer, Volvo embarked on its official partnership with Disney's Pirates of the Caribbean movie franchise by launching a global online treasure hunt for a buried Volvo XC90 V8. The hunt, like the movie, was a huge success and drew more than 100,000 participants from the US, UK, Japan, Austria and Spain. This year, Canada and a host of other countries will join in the adventure. With even more booty at stake, Volvo's hunt promises to be bigger and better, with more than 6,000 treasure hunters already pre-registered.

"We had such a great response to the hunt last year that we really did feel the pressure to come up with something equally cool and attention grabbing this year," said Linda Gangeri, national advertising manager for Volvo Cars of North America. "So, yes, we really did sink a treasure chest to the ocean floor filled with gold and the key to a new Volvo. It's sitting there right now just waiting to be found."

Volvo will release more details about the online hunt May 3. For those looking to participate, registration can be done at http://www.volvocanada.com/thehunt.

Keywords:
XC90 (2002-2014), Special Interests, 2007
Descriptions and facts in this press material relate to Volvo Cars's international car range. Described features might be optional. Vehicle specifications may vary from one country to another and may be altered without prior notification.
Related Images
Apr 25, 2007 ID: 11436 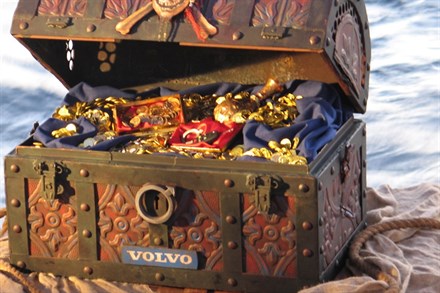