A gleaming Black Sapphire XC90 AWD T6 was the belle of the ball at the black-tie gala, held in suburban Washington. More than 1,400 guests, including prominent figures from the world of sports, entertainment, government, business and philanthropy, all came together for an evening of fund raising and awareness of the 'Best Buddies' cause.

"The donation of this XC90 is the perfect showcase for our continued support and partnership with Best Buddies," said Vic Doolan, Volvo Cars of North America President and CEO. ". It is a fantastic opportunity for one lucky individual to be the first in the country to own what I like to call the first SUV with a conscience."

The Volvo XC90 has already amassed more than 6,000 pre-orders even though it is not expected in dealerships until next month. The vehicle is packed with luxurious versatility and features that include: seating for seven, rear air conditioning and audio controls, leather seating surfaces, 18-inch wheels and tires and an outstanding 305-watt Dolby Pro Logic II 5.1 digital surround sound stereo system.

The top bidder, Brad Blank of Boston, Massachusetts, will also receive two round-trip air tickets to a city to be named where Ashley Judd, who most recently co-starred in "The Divine Secrets of the Ya-Ya Sisterhood", will meet him for a drive in their new XC90. Mr. Blank and Judd will be joined by Best Buddies founder and chairman, Anthony K. Shriver.

Keywords:
XC90 (2002-2014), Events/Activities, Special Interests, 2003
Descriptions and facts in this press material relate to Volvo Cars's international car range. Described features might be optional. Vehicle specifications may vary from one country to another and may be altered without prior notification.
Related Images
Sep 18, 2003 ID: 541 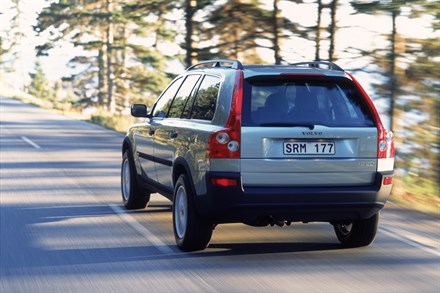