With the C30, Volvo made its debut in the segment for two-door premium cars. The sporty design, with two doors, four individual seats, and a glass tailgate, gives a young and dynamic group of customers "a Volvo of their own".

The C30 personality has been boosted with a new, confident front, a bold styling kit for those who want even more attitude - and a new razor-sharp sports chassis.

The Volvo C30 displays clear elements of other classic Volvo models with a sporty pedigree, such as the Volvo 1800 ES. Anyone who recalls the acclaimed Volvo SCC (Safety Concept Car) will recognise the exclusive and convenient glass tailgate.

The grille has a unique pattern with the enlarged iron mark in the centre. The air intake resembles that of the XC60.  Viewed from the side, the pronounced wheel housings and the sloping roof give the C30 a fast silhouette that is further enhanced by the markedly boat-shaped side windows. This has been created through the narrowing roof and the wide shoulders. The shoulders at the rear are powerfully rounded and accentuated by both the horseshoe-shaped lighting pattern of the tail lamps and the glass tailgate.

The popular C30 Contrast Colour Collection - featuring a contrasting shade at the lower part of the car body - has been extended with a possibility to use Terra Bronze as the contrasting colour.

The C30 is also available in an R-Design version featuring a redesigned front and rear. The body kit is colour-coordinated with the rest of the body, giving the impression that the car has been lowered more than the actual 10 mm reduction in ride height. The C30 R-Design is also equipped with five-spoke Cratus wheels that are the hallmark of the R-Design range. The interior is available with dramatic new black upholstery as an alternative.

The following exterior colours are available for the Volvo C30:

The C30 has room for four adults thanks to the two separate seats in the rear, with generous head- and legroom. The rear seats are slightly centred to provide a feeling of space and a good forward view. It also makes communication between front and rear occupants much easier.

The space between the seats also makes the thin, visually floating centre stack clearly visible from the outside through the glass tailgate.

The interior is inspired by Scandinavian product design with the emphasis on uncluttered surfaces, honest materials and functionality.

Volvo's ultra-thin centre stack is available in a Oyster Burst Déco version, inspired by the surface texture of the classic Swedish Hagström guitars that became world-famous in the hands of stars such as Elvis Presley back in the 1950s.

The centre stack's floating theme flows smoothly with similar elegant soft curves all the way to the rear seat. The storage space between the seats has also been designed with the help of Scandinavian design tradition's most renowned hallmark - smart functionality.

The Volvo C30 offers a range of interior options. Among other things, there is a combination known as Espresso/Blond, consisting of a dark brown upper section and a blond, fresh shade on the lower door sides. The blond tone, somewhere between grey and beige, is an expression of Volvo's strong Scandinavian design tradition. The Espresso/Blond interior permits the integration of energetic new highlight colours such as orange, green and blue in the fabrics, as well as leather upholstery in Cranberry.

The Volvo C30 can be equipped with Bluetooth® technology that enables wireless communication. The Bluetooth connection has been upgraded to allow not only hands-free phone conversations but also music streaming from your preferred Bluetooth enabled portable music player. Volvo is actually the only brand to offer Bluetooth music streaming throughout the entire vehicle range.

Thanks to its small size, the Volvo C30 is very nimble to handle, even in limited space. It is built according to the same principles as the rest of the cars in the Volvo range.

A very torsionally rigid body, a wide track and a relatively long wheelbase all help give it responsive and stable driving characteristics.

The chassis, with spring struts at the front and Multilink axle at the rear, is set up for controlled, reassuring driving manners and alert steering response. The Multilink rear axle is an independent rear suspension system featuring a number of links and it is designed to offer a good combination of controlled wheel movements and a high level of ride comfort.

The optional sports chassis (also available together with R-Design) has been modified in several areas. The steering is more precise owing to the installation of stiffer bushings. The steering ratio is lower, giving 10 percent faster response to steering wheel input. Spring stiffness has been increased by no less than 30 percent in order to improve the car's poise in enthusiastic driving. The dampers are also stiffer and the exclusive mono-tube technology builds up pressure much more quickly. The roll stabilizers are stiffer to reduce any leaning tendency when cornering.

The new sports chassis makes the C30 a better-balanced and more agile car. Road contact is more distinct and feedback from the wheels is faster and clearer, promoting a more alert feeling while driving. This is something that also benefits safety.

The engines in the Volvo C30 are transversely installed in-line units. Together with large displacement, the five-cylinder configuration provides high torque across a broad rev band, and thus also swift acceleration and excellent driveability within a wide speed range. Four-cylinder engines are also available.

T5 with 230 hp The Volvo C30 T5 is the top model, featuring a turbocharger and five-speed automatic transmission or a six-speed manual gearbox. It produces 230 hp and 320 Nm of torque.  Other petrol engine versions are also available, as well as a 2.0-litre bio-ethanol Flexifuel variant on certain markets.

2-litre diesel The five-cylinder 2-litre turbodiesel introduced in the all-new Volvo S60 is now available throughout Volvo Cars' model range. The  five-cylinder D3 is in principle the same engine as the well-established 2.4-litre diesel, but its displacement has been reduced with a shorter stroke to optimise fuel consumption. The engine has been optimised for low fuel consumption and the injection system has a different type of piezoelectric fuel injector compared with the D5 engine. These injectors minimise consumption with exceptionally rapid and precise injection pulses under high pressure. This promotes extremely efficient combustion.

In the Volvo C30 the 2-litre turbodiesel is available in two variants:

The S40 is in addition available with the 1.6-litre D2 diesel engine, which also complies with the Euro 5 standards. Fuel consumption is 4.3l/100 km (EU Combined), which corresponds to CO2 emissions of 114 g/km.

The engine produces 115 hp and 270 Nm of torque and now comes with a six-speed manual gearbox.

The can also get the upgraded 1.6-litre diesel engine that meets the Euro 5 exhaust emission regulations being implemented in January 2011. The further-developed engine combined with a six-speed manual gearbox and start/stop function keep CO2 emissions down to 99 g/km.

Volvo Cars has developed various information systems and functions designed to help the driver while on the move. One such system is IDIS (Intelligent Driver Information System), which for instance delays incoming phone calls in complex traffic situations that require the driver's undivided attention.

Protective safety in the Volvo C30 is structured around a network consisting of exterior and interior safety systems that interact with one another to reduce the risk of occupant injury in a collision.

The body of the Volvo C30 features immense torsional rigidity and the car has a sturdy chassis, a combination that results in consistent, predictable behaviour on the road.

Incoming collision forces are distributed so the passenger compartment remains as intact and undamaged as possible. The car's body is therefore built in the form of a metal cage made from different grades of steel, where all the components interact with one another to ensure controlled deformation.

The interior safety systems aim to keep the passengers securely in place and also to reduce the risk of serious injury. In order to provide the most effective protection possible, Volvo Cars has developed a number of in-house systems such as WHIPS (Whiplash Protection System), SIPS (Side Impact Protection System) and IC (Inflatable Curtain). All are fitted as standard in the Volvo C30. What is more, all four seats are equipped with three-point inertia-reel seat belts, belt pre-tensioners and head restraints. 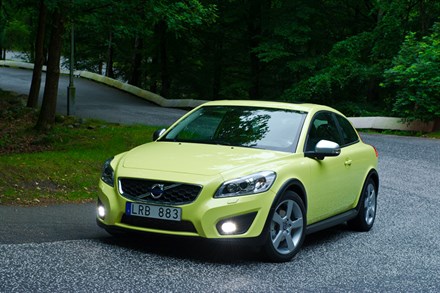 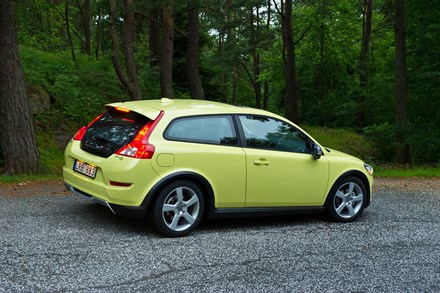 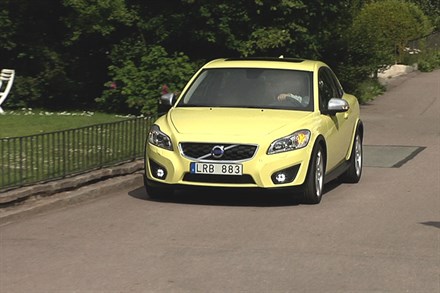