PROTECTIVE SAFETY
Crumple zones that employ different grades of steel
During the development of the all-new Volvo S40, the designers started off by using the crash safety levels of the Volvo S80 as a model – with the aim of reaching the same high level with the new compact body.

“While we cannot change the laws of physics, our aim of building cars that are the safest in their class applies to all models, irrespective of size,” says Ingrid Skogsmo, head of the Volvo Cars Safety Centre.
In a compact car body, the preconditions for efficient deformation are different to those of a large body. Since the necessary deformation is absorbed within a shorter total distance, the various materials’ properties must be exploited to the maximum so as to absorb as much of the incoming energy as possible.
“A tough challenge, one that we approached in an entirely new way,” confirms Ingrid Skogsmo.
The frontal body structure of the Volvo S40 was divided into several zones, each with a different task in the deformation process. The outer zones are responsible for most of the deformation. The closer the collision forces get to the passenger compartment, the less the materials used deform. The objective is that the passenger compartment should remain intact in most collisions.
In order to give each zone the relevant properties, different grades of steel are used in different areas. Four different steel grades are used. In addition to conventional bodywork steel, three different grades of high-strength steel are employed: High Strength Steel, Extra High Strength Steel and Ultra High Strength Steel.
The zonal system enables the collision forces to be absorbed in a highly ingenious and effective manner:

Low-speed deformation zone
The front bumper incorporates an extremely rigid crossmember of Boron steel (Ultra High-Strength Steel). The attachments to the longitudinal members of the body are designed in the form of ‘crash boxes’, which help absorb the forces generated by
a low-speed collision without damage to the rest of the body structure. The crash boxes can be replaced easily at reasonable cost.

High-speed deformation zone
The straight sections of the side members are made of High-Strength Steel, a very ductile grade of material, which is optimised for high energy absorption. This is the zone that accounts for most of the deformation in a collision.
In addition, Volvo has opted to include upper side members also in the compact Volvo S40 since they provide significant occupant protection if the vehicle should collide, for example, with a truck platform or a loading pier.

Back-up zone
The section of member that turns outward toward the A-post is designed to act as a barrier for the cabin space and as a back-up reducing deformation. The design also helps minimize the risk of the front wheel penetrating the interior. The wheel instead helps absorb the collision forces. This section is extremely rigid and is made of extra high-strength steel.

Three-way attachment
A rigid cross-member connects the A-posts and lower side members. On each side they form an extremely rigid three-way attachment, which very strongly helps to maintain the the cabin space in a severe crash.
The new front structure is one of Volvo’s many patented safety designs.

Built for children too
Just like the rest of the Volvo range, the all-new Volvo S40 is developed with a keen focus on children. The body’s safety structure and interior safety systems are designed and dimensioned to help protect the youngest occupants too.
Both rear outer seats can be fitted with integrated child booster cushions for children above three years of age.
The front passenger airbag can be switched off and disabled with a key (available from spring 2004) (not in the US or Canada).
The front passenger seat is factory-prepared for fitting a rearward-facing child seat. It has special anchorage loops for attachment using the seat belt.

Projector-type headlamps
The headlamps feature projector-type low beams. The concentrated beam of light is surrounded by a “halo” which helps oncoming drivers judge the distance to the car.
Bi-Xenon gas discharge lamps (GDL) for high and low beam are available as an option.
Additional side-mounted turn indicators in the door mirrors and integrated side-marker lights in the front and rear lamps make the Volvo S40 easy to see from the side too.

Ergonomic driver’s environment
An ergonomically designed seating position with all the instruments and controls in just the right position makes for safer progress. In this respect, the Volvo S40 continues a renowned Volvo tradition. It has a comfortable and conveniently operated driver’s seat, an adjustable steering wheel and a logically laid out instrument panel.
Steering wheel-mounted controls for the audio system, cruise control, telephone and RTI (Road and Traffic Information) navigation system add further to driving safety.

Intelligent Driver Information System
The all-new Volvo S40 introduces IDIS – the Intelligent Driver Information System.
IDIS is a car industry world novelty, influenced by fighter aircraft technology. The system helps the driver avoid being distracted while driving.
When the traffic requires the driver’s full attention and concentration, for example when overtaking or braking, signals from the integrated GSM telephone and certain peripheral information are delayed until the situation is calmer.
The IDIS function continuously registers the driver’s activity by monitoring steering wheel movements, the accelerator pedal, turn signal function, braking and so on. This information is processed and at a given activity level, information that is not essential to safety is held back.
In normal conditions, the driver can at any time answer phone calls and text messages and receive traffic information.
IDIS is standard in all versions of the all-new Volvo S40, irrespective of whether or not the car is fitted with an integrated phone.
IDIS is factory-prepared for forthcoming on-board systems for information and communication. The more such functions the car has, the greater the benefit of IDIS.

Keywords:
S40, Produktmeldungen
Descriptions and facts in this press material relate to Volvo Cars's international car range. Described features might be optional. Vehicle specifications may vary from one country to another and may be altered without prior notification.
To view the full copyright information click here
Aktuelle Fotos
Aug 18, 2003 ID: 7972 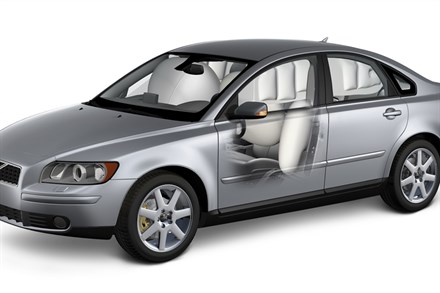 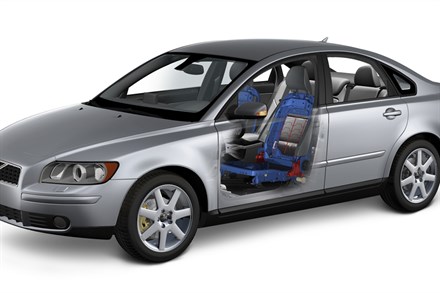